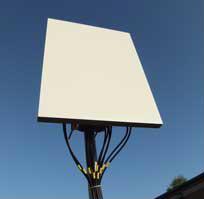 Designed for high-speed MIMO 4G (and beyond) urban access for backhaul, this was originally a European Union funded project that has become a finished and available multi-beam antenna with additional military and security beneficial applications.

By removing barriers to next-generation network deployment, this multi-narrow-beam antenna allows for a dramatic increase in capacity over existing communication systems. It provides an essential component enabling an improvement to the overall infrastructure capacity density of the current mobile network by an order of magnitude (10x).

This multi-beam antenna has 90˚ coverage (a 90˚arc) utilising six individual narrow beam patterns each with a half power beamwidth of 15˚. MIMO capability is provided with +/-45˚ polarisation in each of the six 15˚ sectors.

The advantage of this format is that a narrow beam can create high-density coverage within a specific narrow area allowing for a high level of frequency re-use while being far more efficient than installing six separate narrow beam directional antennas. By positioning four multi-beam antennas in a square formation, complete 360˚ coverage is achieved as this provides 24 dual-polarised beams. The current system benefits from meeting ETSI specification for multi-beam antennas (EN 302 326-3 V.1.1.2) provides low side-lobe levels for greater system efficiency.

For security and military applications the technology can be scaled to cover other frequency bands, with applications such as communications to multiple mobile platforms (ground or airborne). This system has the benefit of providing higher gain over a wider angle than a single sector antenna. Communications are more secure and less prone to intercept and jamming than Wide Beam or Omni antennas.

The antenna measures only 586mm (23in) high x 456mm (17.95in) wide x 76mm (3in) deep, making it extremely compact given that it provides 2 x 6 beams each with 17dBi peak gain. For dense urban deployment, this compact multi-beam antenna will reduce wind-load on towers and the cost of installation compared with conventional alternatives.

The antenna element comprises a single cross-dipole assembly operating at a centre frequency of 3.5GHz interlocked in a configuration, which provides a slant dual polar beam. Eight sets of these assemblies are fed in phase through a stripline feed to create the single 110˚ sector antenna which forms the basis for the array. There are eight sector antennas in the complete assembly.

In order for the 6 (x2 polarisations) narrow beams to be formed to cover the 90˚ arc, two 8×8 Butler matrix beam forming devices are used to feed the separate ports of each antenna element. By a mechanism of fixed phase shifters and couplers the Butler matrices provide defined sets of phases into each of the eight internal antenna elements, which results in two sets of six skewed beams (the two outer ones covering +/-60degree are not currently used).

Within the new unit the Butler matrix devices are fully integrated into the antenna eliminating the need for 16 phased-matched cables making for a much more efficiency and cost-effective antenna.

In this antenna the down-tilt is a nominal 2˚across the band of interest, i.e. 3.4 – 3.6GHz with an elevation beamwidth of 10˚ to the half-power point.