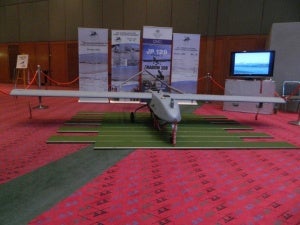 Since designing our original aluminium Trackway we have used it as the basis for all the other products in our expanding portfolio.

The most recent of these is the Unmanned Aerial Vehicle (UAV) Landing Mat that we launched at DSEi 2011 which is the only product of its kind on the international defence market.

The Australian armed forces were the first to realise the potential of our new system and they placed an £800,000 order in December 2011.

These mats were delivered earlier this year prompting the Australians to place a significant follow-up order for additional accessories such as extra panels, membranes and stakes which have just been delivered.

Ahead of official deployment overseas all products will be put to the test at a qualifying session at the Woomera Test range later on this summer.

The Landing Mats have already been on display though as it was given pride of place at the Heli and UV Pacific exhibition in Queensland where it was used to proudly display the star of the show, the RQ-7 Army Shadow 200 UAV.

The UAV Landing Mat is made of our signature lightweight aluminium matting and provides armed forces with a temporary smooth landing, regardless of the terrain, for any size or weight of UAV. A key benefit of the mat is that it helps to protect valuable UAV assets from foreign object damage (FOD).

To ensure quick deployment it can be laid easily by hand and requires minimum ground preparation. It can be recovered and re-deployed many times over making it much more economically viable and operationally flexible than concrete runways.

As modern air combat and surveillance missions become increasingly dominated by UAVs we’re sure that our Landing Mat will be in high demand from armed forces worldwide looking to ensure they have the appropriate runway infrastructure in place to support remote and challenging operations.

Training of the equipment was successfully completed by the 5th Movements Company Capability Branch at...

FAUN Trackway® is delighted to confirm its expansion into the nuclear sector after securing Fit For Nuclear...