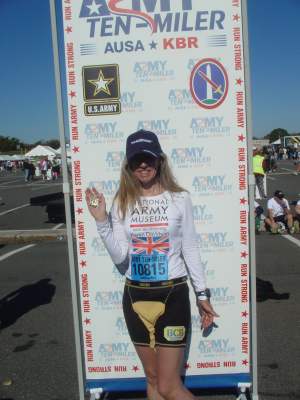 Military enthusiasts got their running shoes on to support the troops at the Army Ten-Miler in Washington D.C. on 21 October, and FAUN TRACKWAY couldn’t help but get in on the action.

Karen Davidson, wife of Senior Vice President for the Welsh Government in the USA, Dan Cecchin, who is a vocal champion of ours, took part in the run and flew the flag for FAUN TRACKWAY.

The competition for entry is strong and Karen beat off stiff competition to win a place in the final lineup of 30,100 runners from across the world. Karen placed 149 out of 1,100 women runners in her age group, coming 7,498 overall – a fantastic feat for a recreational runner competing against more than 10,000 active duty military members.

The charity run is now in its 28th year and navigates the military district of Fort Lesley J. McNair in Washington, taking in Arlington Memorial Bridge and beginning and ending at the Pentagon.

Raising funds for the British National Army Museum’s (NAM) Building for the Future project, Karen completed the race in one hour 29 minutes kitted out in full NAM gear and FAUN TRACKWAY baseball cap. The outfit garnered attention from fellow competitors and helped raise awareness of both organisations within the U.S. army community.