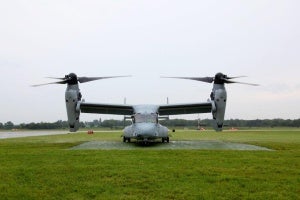 Last month we showcased our new PSA Flat Top Helicopter Landing Mat (HLM), at the 2012 Royal International Air Tattoo (RIAT) and it was met with a great reception.

The HLM can be used to construct temporary helipads and allows expeditionary forces to mark out safe landing zones. Unlike traditional expedient surfaces, it provides a smooth surface, meaning it is a safer and more stable foundation for aircraft to land on.

The show was a fantastic opportunity to put it to the test as the RIAT is the world’s largest military air show and has more than 130,000 visitors each year.

Throughout the course of the show, several pilots jumped at the chance to land on our new and innovative product.

In a true testament to the HLM’s capabilities sixteen different helicopters landed successfully on it, including the Osprey; an extremely powerful and heavy American multi-mission military aircraft with a vertical take-off and landing capability.

HLMs are used extensively by armed forces across the globe as they are heat resistant and help to reduce brownout and foreign object damage.