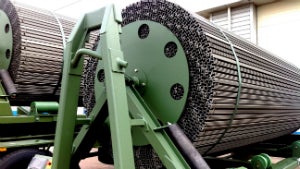 FAUN Trackway has produced its 100th Trackrack and 50th Spoolrack.

This figure is a milestone for the firm, which has been manufacturing portable roadways and runways for 600 years.

The units were recently purchased by the Danish Defence Acquisition and Logistics Organisation (DALO).

The Danish Armed Forces’ order of the heavy ground mobility system (HGMS) meant that the Anglesey site was commissioned to manufacture its Trackrack for the 100th time. The Trackrack is a specially designed launch, recover, transportation, and storage system for FAUN’s Trackway panels.

Trackway is FAUN’s own portable, temporary roadway, consisting of a series of interlocking aluminium panels.

The design was developed more than 40 years ago. It forms the basis for all of roadway and runways in FAUN Trackway’s product portfolio. Panels can be split up or added to as needed, to create potentially unlimited lengths of roadway and make the solution fit for purpose.

The system has been deployed around the world, to aid military and disaster-relief missions in a wide variety of challenging terrains such as sand, snow, desert and marshland.

Denmark’s request also meant that the production team manufactured the 50th Spoolrack unit. Spoolracks are designed to store and transport additional lengths of Trackway, which can then be transferred for deployment through a spool-to-spool system.

Alongside DALO, the HGMS is also held by the Irish Defence Force and the Turkish Armed Forces.

FAUN TRACKWAY director Chris Kendall said: "Trackrack and Spoolrack units form part of the HGMS, our flagship system, which is now held in the inventories of more than 35 armed forces worldwide.

"Designed for speed, the HGMS means 50m of Trackway can be laid by two men in only six minutes.

"The landmark sales showcase how invaluable the resource is to armed forces around the world to ensure efficient and safe access in a variety of environments.

"We are proud to have reached such a symbolic milestone in its production and know this is simply a stepping stone to the delivery of many more."