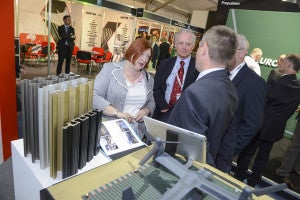 As the leading manufacturer of portable roadways and runways, FAUN Trackway attended the show to demonstrate how its products are helping armed forces to gain access to ever-more remote areas and challenging territories.

FAUN was flattered to host Edwina Hart, MBE CStJ AM, Minister for Economy, Science and Transport for the Welsh Government, who spoke to Trackway about its heritage in Anglesey and continued commitment to doing business there.

Other visitors to the stand showed a keen interest in FAUN’s UAV landing mat, the first product of its type to accommodate any size or weight unmanned system. It is ideal for expeditionary missions or where it is not practical or feasible to install permanent infrastructure.

The company’s helicopter landing mat (HLM) also received a number of enquiries. This system uses interlocking military-grade panels that can to mark out safe take-off and landing areas.

A big thank you must go to Aerospace Wales for inviting FAUN to exhibit on their stand and also to the Welsh Government for helping the team get ready for the show. Both organisations are long-time supporters of Trackway, and play a vital role in promoting businesses in Wales.

Paul Lindsay, Operations Director at Aerospace Wales, said: "FAUN Trackway is an active member of Aerospace Wales and always a pleasure to work with. The company has had a great deal of success, both through its own efforts and keeping networks open through our Forum, and we look forward to helping them extend their reputation for years to come."

The minister said: "Farnborough provides a great opportunity to showcase what Wales and Welsh companies have to offer. Aerospace is one of our key sectors where we have considerable strengths in manufacturing and maintenance, repair and overhaul – more than 160 companies, employing around 23,000 people, in the sector in Wales, ranging from global giants to a large number of very clever SMEs. The show saw us promote Welsh expertise in the sector and support Welsh businesses."