Once again at Farnborough, the battle between Boeing and Airbus for domination in the superjumbo aircraft market dominated the headlines at Farnborough, while military spending cutbacks meant significant deals were in short supply.

Airbus didn’t neglect its military side altogether, announcing it had won a contract worth £50m from the UK Ministry of Defence (MoD) through the OCCAR multinational organisation, to provide the UK’s first full-flight simulator (FFS) for the A400M military airlifter. 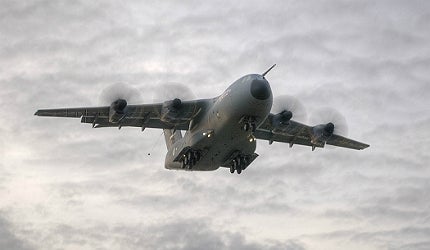 Airbus announced a £50m contract from the UK MoD for the UK’s first full-flight simulator for the A400M military airlifter. Image courtesy of Benurs.

Elsewhere, the defining factors for the defence market are the global economic slowdown, which has led to air forces upgrading existing equipment and aiming to recoup cash by selling on older aircraft to newer markets, and the draw-down in Iraq and Afghanistan, which has turned eyes to potential dispute areas in the Asia Pacific region and locations in the Middle East.

“Airbus didn’t neglect its military side altogether, announcing it had won a contract worth £50m from the UK Ministry of Defence (MoD).”

Andrew Dunn, vice-president of international business development for electronic systems, said that the company was also getting a lot of business upgrading electronic warfare modules aboard legacy aircraft, being sold by the larger western militaries to up-and-coming militaries.

He also noted a trend from the infrared-oriented electronic warfare systems, made necessary by the asymmetric warfare in recent conflicts, back towards radio frequency technology more suitable for use in potential future theatres. 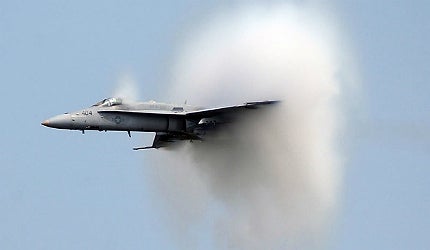 The US Navy’s F/A-18 aircraft are due to receive software enhancements for their ALQ-124 on-board jammer. Image courtesy of Tsgt. Raheem Moore, USAF.

New military aircraft, or at least tweaks to existing models, weren’t entirely off the radar. Alenia Aermacchi and ATK together launched the MC-27J multimission armed version of the Spartan transport at the show, aimed at the international market for special operations, from ISR to armed overwatch.

Though orders of the F-35 Joint Strike Fighter and Eurofighter Typhoon have been dwindling, news was still bubbling about the latest progress in both programmes.

“New military aircraft, or at least tweaks to existing models, weren’t entirely off the radar.”

EADS / Cassidian announced new generation encryption technology to be installed into the Typhoon this summer. 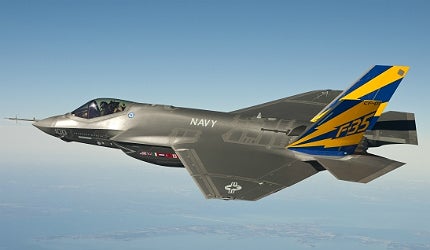 Russian Helicopters made a strong stand at the show, announcing a collaboration with AgustaWestland to produce a new light helicopter, as well as showcasing the latest Mi-171A2 model of its long-standing Mi-8/17 rotorcraft.

Rolls-Royce tickled the press with a display featuring a moving scale model of its Trent 1000 jet engine and announced its usual slew of civilian and military engine deals.

The US Army awarded the company a US$183m contract to service the M250 engines that power the Kiowa Warrior scout helicopters and delivered the same engine to Grob, to power its new G120TP trainer aircraft, whose first customer is the Indonesian Air Force.

“Anyone expecting an announcement progressing the Franco-British cooperation on an unmanned medium-altitude long-endurance (MALE) drone would be disappointed.”

Anyone expecting an announcement progressing the Franco-British cooperation on an unmanned medium-altitude long-endurance (MALE) drone would be disappointed.

Under the new Hollande regime, France’s UAV development strategy is being reviewed, and any contracts awarded will not be announced until the end of July at the earliest.