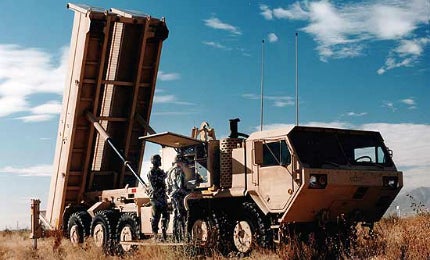 Following the proposal’s failure to achieve unanimous support from all 193 member states, the treaty was eventually approved after 154 states voted in favour. Syria, Iran and North Korea voted against the decision, while 23 absentees included China, Russia and India.

The US ordered a Terminal High Altitude Area Defence (THAAD) battery to be located to Guam following continued belligerence from North Korea, with the country threatening to target US territory with a nuclear strike.

North Korean state media carried a statement, claiming that the nation’s military had been cleared to launch an attack using ‘smaller, lighter and diversified nuclear weapons’, with South Korea’s Yonhap news agency alleging that a missile capable of reaching Guam had recently been moved.

A statement from the Pentagon confirmed the battery’s relocation, claiming the move to be precautionary.

US Defense Secretary Chuck Hagel said: "They have a nuclear capacity now. They have a missile delivery capacity now. And so, as they have ratcheted up their bellicose, dangerous rhetoric, and some of the actions they have taken over the last few weeks, present a real and clear danger."

North Korea revealed plans to restart operations at its Yongbyon Nuclear Scientific Research Center amid a backdrop of increasing tensions on the Korean Peninsula.

State-run KCNA news agency quoted a North Korea General Department of Atomic Energy spokesman as stating that the move was designed to bolster the country’s ‘nuclear armed force both in quality and quantity’, while also solving the country’s chronic electricity shortages.

Considered as the sole source of plutonium for North Korea’s nuclear weapons programme, the Yongbyon reactor was mothballed as part of a disarmament-for-aid accord, reached in six-party talks between Pyongyang, China, South Korea, Japan, Russia and the US in July 2007.

A commercial 46in LED display is mounted onto the interior of the rear ramp, displaying a comprehensive view of surroundings captured by a high-definition camera installed at the rear of the vehicle.

Initial sketches of the virtual window system were created by design students and professors from The College for Creative Studies in Detroit, with support provided by army warrant officers from the US Army Ordnance School.

The project is now to be followed up by a second system, Virtual Window 2 (VW2), to be integrated and tested on a Stryker vehicle, with VW2 expected to provide 360-degree visual situational awareness through electro-optical sensors.

US DoD to deploy army contingent to Jordan

The US Department of Defense announced that it will deploy an army headquarters unit to assist Jordanian armed forces in protecting the nation’s border with Syria, as the country continues to be plagued by unrest.

Hagel confirmed that the unit would bolster efforts by a small US military team that has been working on the border to prevent the spillover of Syrian chemical weapons.

"Personnel will continue to work alongside Jordanian armed forces to improve readiness and prepare for a number of scenarios," Hagel added.

The US military and its interagency partners are providing training and equipment to Amman to detect any chemical weapons transfers along Jordan’s border with Syria, and also to develop the country’s capacity to identify and secure chemical weapons assets.

Tensions between North Korea and the US continue to teeter towards breaking point, as the UK announced further non-lethal assistance to opposition forces in Syria.

While the UK’s Ministry of Defence established a decade-long, £160bn defence procurement plan, a US-based cybersecurity firm accused China of engaging in sustained hacking of US companies and organisations.

The Electronic Warfare Market in the United States to 2024: Market Brief

The College for Creative Studies