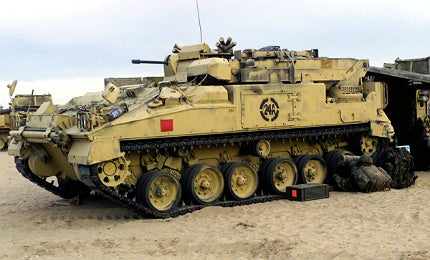 The UK Ministry of Defence released a new £160bn defence equipment plan, detailing the nation's procurement and support programmes for the next decade.

The document established spending plans for the UK Army, Royal Navy and Air Force for the 2012-2022 period. UK defence secretary Philip Hammond said: "For the first time in a generation, the armed forces will have a sustainable equipment plan."

190 soldiers practiced multiple scenarios under supervision of a sophisticated system of computers and avdnaced simulation software during the exercise, with the resulting data analysed by the UK MoD's Defence Science and Technology Laboratory (Dstl).

"By testing our soldiers in a number of demanding scenarios we can determine the optimum tactics, equipment and training that are required for us to shape the army of the future," Deakin added.

The VBCI vehicle crew, equipped with the FELIN system, can recharge the batteries of onboard power systems, as well as help them improve dismount operations preparation by providing capabilities for using communication equipment from inside the vehicle.

Built by Sagem, FELIN is a high-tech integrated infantry suite chosen by the French Army for all its infantry units as part of its soldier modernisation programmes.

All VBCIs are scheduled to be altered to support the FELIN system and the transformation process could either be directly on the vehicles currently under production, or through retrofit in regimental workshops for already developed vehicles.

Chinese military linked to massive cyber attacks on US companies

An intelligence unit of China's People's Liberation Army has been linked to prolific cyber attacks on the US and foreign companies in recent years, according to a report published by US cybersecurity firm Mandiant.

While Beijing has repeatedly denied allegations of illegal hacking, Mandiant has alleged that the PLA's Unit 61398 to have stolen hundreds of terabytes worth of data in incidents stretching back to 2006.

"The nature of Unit 61398's work is considered by China to be a state secret," the report stated. "However, we believe it engages in harmful computer network operations."

The Chinese Government quickly moved to discredit the report however, with Foreign Ministry spokesman Hong Lei stating his doubts about the evidence.

The US Defense Advanced Research Projects Agency (DARPA) issued a request for information (RFI), seeking innovative therapies and methods capable of mitigating ionising radiation to risk to both military and civilian personnel.

The agency intends to use information to better understand the biophysical effects of acute ionising radiation exposure in humans to support potential new programmes that may lead to new areas of research, increasing long-term survival.

DARPA Defense Sciences Office programme manager Mildred Donlon said a lot of learning was needed to understand how the chronic exposure impacts the body, even though scientists have succeeded to an extent in developing treatments to prevent short-term death from acute ionising radiation sickness.

"We're hopeful that with increased understanding the immediate treatments for exposure can be made more effective and that we can develop novel therapies and strategies for enhancing long-term survival," Donlon said.

The future make-up of armed forces around the world became clearer as the UK was forced to announce further redundancies, while Russia looked at robotic replacements.