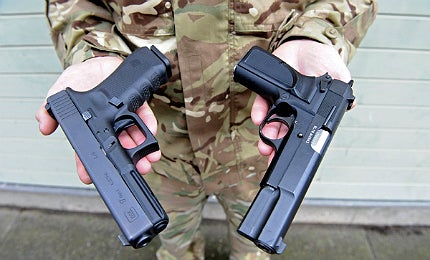 The Russian Army announced its intention to start trials of a future, high-tech soldier system in April 2013. The military equipment sets, dubbed Ratnik, completed preliminary testing at the Alabino Shooting Range in Moscow, Russia, in September 2012.

The infantry soldier system comprises of more than 40 components, including firearms and body armour, as well as optic, communication and navigation devices.

The system is expected to be available in both summer and winter variants, while also catering for regular infantry, rocket launcher operators, machine gunners, drivers and scouts.

The Russian Ministry of Defence revealed plans to deploy robotic systems for munitions disposal and mine clearance operations in the battlefield, taking soldiers away from dangerous situations.

The MoD issued an invitation to tender, requesting the production of new types of weapons and military hardware, including robots.

Currently being considered is the procurement of civilian robotic equipment, including snow and swamp-traversing vehicles, Yel-10 and Yel-4 firefighting complexes and LUF-60 tracked firefighting support units.

Robotisation of critical military missions is not only expected to protect soldiers, but also results in RUR75bn ($2.4bn) as cost savings to the ministry between 2012 and 2014.

The UK Ministry of Defence awarded a contract to Viking Arms, for the procurement of 25,000 new Glock17 Gen4 pistols for the country’s armed forces.

The pistols will replace the Browning L9A1 pistols currently used, with the new 9mm-calibre Glock not only more accurate, but lighter and equipped with an increased magazine capacity.

UK Defence Equipment, Support and Technology Minister Philip Dunne said: “We are determined to provide our troops with the best possible personal kit available and these new Glock 17s will give them greater firepower and accuracy on operations.”

The US Department of Defense issued a $605,000 contract to Global Telesat for the company’s Blimp in a Box aerostat systems.

Sought after a demonstration to the Dod in December 2012, BiB is scheduled to be deployed at an undisclosed army base for provision of semi-persistent, mobile intelligence, surveillance and reconnaissance (ISR) data at platoon level.

Designed for rapid deployment by a two man crew, the BiB is a tethered, lighter than air (Lta) system designed to provide real-time day and night data for ISR missions, improvised explosive device (IED) detection, border security and other governmental and civilian purposes.

The UK Ministry of Defence announced a third round of army redundancies, with 5,300 more servicemen losing their jobs in the country’s armed forces.

UK defence secretary Philip Hammond said: “The army is actively managing recruitment to reach the target numbers, but unfortunately redundancies are unavoidable due to the size of the defence deficit that this government inherited and the consequent scale of downsizing required in the army.”

“We will have smaller armed forces but they will in future be properly equipped and well-funded, unlike before.”