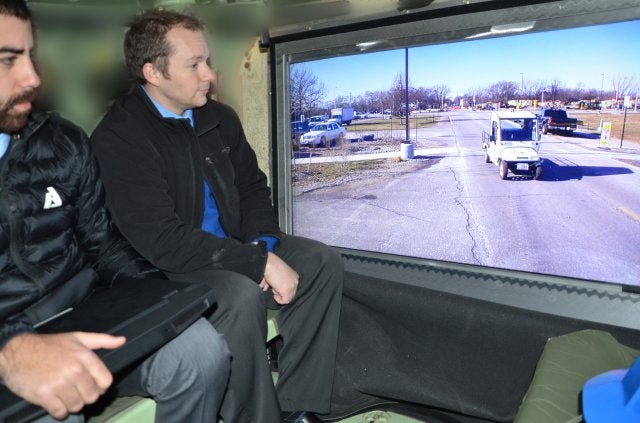 Scientists from the US Army Tank Automotive Research, Development and Engineering Center (TRADOC) have developed a new virtual window to help enhance visual situational awareness of the Bradley infantry fighting vehicle (IFV) crew in the battlefield.

A commercial 46in LED display mounted onto the interior of the rear ramp, the Virtual Window 1 provides soldiers with a comprehensive view of surroundings before they proceed out of the vehicle.

Bradley IFV is generally surrounded by a protective armour unlike mine-resistant ambush-protected (MRAP) vehicles, which features several transparent armoured windows for crew to survey the surroundings.

Tank Automotive Research, Development and Engineering Center engineer Andrew Kerbrat said the window receives and displays imagery collected by the high-definition camera installed on the rear of a Bradley vehicle, enabling troops to view outside the vehicle even when the ramp is closed.

"The window receives and displays imagery collected by the high-definition camera installed on the rear of a Bradley vehicle, enabling troops to view outside the vehicle even when the ramp is closed."

Virtual Window 1 sketches were created by design students and professors from the College for Creative Studies in Detroit, with support from army warrant officers from the US Army Ordnance School, as part of an innovations solutions training event organised by the project team, which is also planning to host a second workshop for Virtual Window 2 in May.

Scheduled to be integrated into and tested on a Stryker vehicle, the Virtual Window 2 is likely to feature 360° visual situational awareness through electro-optical sensors, thermal viewer through a commander's Gimbal for medium range situational awareness (CITV-like) capability, and unmanned ground vehicle command and control capabilities.

Other possible enhancements include ability to feed video from a remote soldier camera back to an ICV followed by display on screen, remote mission planning from a tablet, in addition to Force XXI battle command brigade and below capability displays.

Image: US Army TARDEC Engineers validates the virtual window demonstrator at the Detroit Arsenal in Michigan, US. Photo: courtesy of US Army.

India and UAE agree to advance their defence cooperation

US Army on track to equip soldiers with high-tech gear