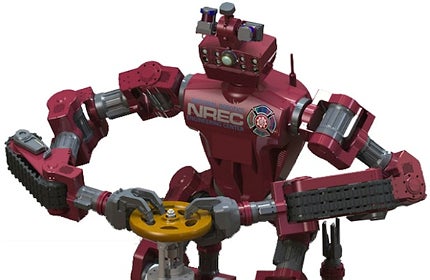 The UK Government announced it was to provide non-lethal assistance to opposition forces in Syria, underpinning the country’s willingness to end the ongoing humanitarian crisis in the country.

UK foreign secretary William Hague commented that the assistance represented a "necessary, proportionate and lawful response to extreme humanitarian suffering" in the country.

The £13m aid package, which came a week after the terms of an EU arms embargo were relaxed, included non-combat armoured 4×4 vehicles to help move Syrian National Coalition leaders around the country, as well as body armour for personal protection.

The CMU Highly Intelligent Mobile Platform (CHIMP) features rubber tracks on all four limbs, allowing it to red like a military tank to traverse over debris or rough terrain if necessary.

CHIMP is capable of carrying out tasks without requiring step-by-step direction from a human controller, preventing lag between command and execution, and its ability to grasp tools using manipulators on each limb allow to it climb ladders or turn a steering wheel.

BAE Systems requested a base level investment from US Congress to prevent a planned shutdown of the Bradley industrial base production and supply chain from 2014 to 2017.

The three-year closure is expected to result in serious long-term consequences for the army, as well as resulting in losses of unique industrial capabilities, military preparedness and skilled labour.

The industrial base helps to maintain the readiness of four out of five vehicles that are in service with the US Army’s Armored Brigade Combat Teams, while also supporting upgrades and development of the Bradley infantry fighting vehicle, M88 recovery vehicle, M109 Paladin artillery systems and the M113 MAP.

The company is proposing that a Congress investment will help maintain the army’s combat capabilities and also bridge the gap caused by the shutdown.

US to boost missile defence with additional interceptor deployments

The US Department of Defense revealed plans to deploy an additional 14 ground-based ballistic missile interceptors in the presence of nuclear threats posed by Iran and North Korea.

US defence secretary Chuck Hagel stated increases to North Korean and Iranian missile capabilities had prompted the country to stay ahead of any threats.

"The United States has missile defence systems in place to protect us from limited ICBM attacks, but North Korea in particular has recently made advances in its capabilities and is engaged in a series of irresponsible and reckless provocations," Hagel added.

The new deployments, which are scheduled to be stationed at Fort Greely in Alaska and Vandenberg Air Force Base in California, will increase the number of anti-missile interceptors from 20 to 44, with US missile defence capability set to increase by nearly 50% by 2017.

North Korea ordered its strategic rocket and long-range artillery units to switch to combat-ready positions in order to strike US and South Korean military bases if required.

The announcement followed US bombers conducting more exercises in the Korean Peninsula, which are deemed threatening to the country’s sovereignty.

North Korean Supreme Command’s statement run by the KCNA news agency said that all field artillery units, including strategic rocket units and long-range artillery units, have been placed in combat duty posture No 1 to strike the US’s invasionary bases on its mainland, Hawaii and Guam, and all enemy objects in South Korea and its vicinity.

"The US nuclear war racket has gone beyond the danger line and entered the phase of an actual war, defying the repeated warnings from the army and people of the Democratic People’s Republic of Korea," the statement added.

While the UK’s Ministry of Defence established a decade-long, £160bn defence procurement plan, a US-based cybersecurity firm accused China of engaging in sustained hacking of US companies and organisations.

The future make-up of armed forces around the world became clearer as the UK was forced to announce further redundancies, while Russia looked at robotic replacements.