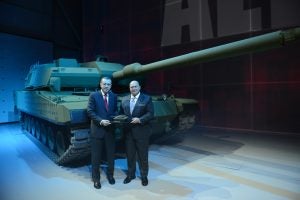 The first prototypes of Turkey’s first national main battle tank ALTAY which is designed and developed by OTOKAR has been introduced. Realized with an investment of about 500 million USD, the ALTAY Project is planned for mass production in 2015.

The first prototypes of Turkey’s first main battle tank ALTAY which is designed and developed by OTOKAR, the biggest privately owned company of the Turkish Defence Industry, has been presented at OTOKAR facilities in Sakarya on November 15th.

The first prototypes of ALTAY reflect the results of the concept development and critical design process of the Project which started in 2009. The first prototype is planned to be used for the testing and optimization of ALTAY’s mobility.

The second prototype will be used in order to test the firing performance of ALTAY. Two more prototypes are planned to be manufactured following the evaluation of the data gathered from first two prototypes. The ALTAY tank will be ready for mass production by 2015.

The first ALTAY prototype had already covered more than 2.000 kilometers during tests up to now. Two prototypes exhibited a special show to the guests of the ceremony at the tank test track of OTOKAR. Including mobility performance like acceleration, maximum speed, side slope, suspension, stabilization track and off-road drive, this show made the impression that, when finished, ALTAY would be the most modern tank in the world.

Kudret ONEN, Head of Koc Holding Defence Industry Group and Chairman of the Board of OTOKAR shared the pleasure of introducing the first prototype of ALTAY to public. After reminding about the initial stages of the Project, ONEN also informed about the future activities of ALTAY.

"550 engineers are working in order to complete the Project, 260 of which are OTOKAR employees. Together with the ALTAY team, and nearly 100 subcontractors, we aim to make the best of our time and prepare ALTAY for mass production by 2015."

Announcing that the mobility performance of OTOKAR’s first two prototypes would be demonstrated during the ceremony, ONEN continued as follows: "Today armoured tactical vehicles of OTOKAR are exported to almost 20 countries. With more than 25.000 vehicles used by the armies in the world, we represent our engineering and production capability.

"Up to now, we accomplished all our projects in time and perfectly, and we tried to fulfil all our commitments successfully. As an example of this, I’d like to announce you that today we’ll show you the two prototypes of ALTAY. With the first prototype that you’ll see today, we’ll test the mobility of ALTAY. This first prototype already covered more than 2.000 kilometers, and first results prove that we’re doing right. And with the second prototype we will perform firing tests of ALTAY.

"We also aim to make this prototype ready for the firing tests during the following months. By using the results that we gather from these two prototypes, we’ll manufacture the ultimate prototypes, test them, and bring ALTAY to perfection as the most modern and capable tank in the world."

Speaking at the ceremony, Mustafa V. KOC, Chairman of the Board of Koc Holding, expressed his gladness about the current situation of the National Tank Project which has a significant importance for the national defence industry strategy of Turkey.

KOC stated the fact that ALTAY had been a prestige Project not only for our country but also for Koc Group, and continued as follows: "ALTAY will provide great acceleration to land platform area of our country’s defence industry in terms of design, development and manufacturing not only with its existing power but also with its investments, developing labour force and technical know-how. With its power to withstand possible threats of today and the future,

"ALTAY will further enhance the strength of our armed forces as the most modern battle tank in the world. With stable management, growing economy and strong army, our country will reinforce its power and leadership within the region, and Turkey will take its place among the special main battle tank manufacturers of the world. Moreover, our country will continuously progress with products developed by its own resources and capabilities, and created with its own technology.

"We believe that our defence industry will further develop in the future through encouraging specialization, and by having and controlling technology."

At the end of the ceremony, Mustafa V. KOC, Chairman of the Board of Koc Holding presented an ALTAY tank model to Prime Minister Recep Tayyip ERDOGAN as a memory of the day.