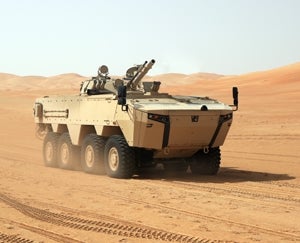 The General Headquarters (GHQ) of the UAE Armed Forces has awarded Al Jasoor a contract for the supply of 8×8 amphibious infantry fighting vehicles, at an estimated value of more than two billion AED.

The decision to purchase the vehicles was made following a thorough commercial / technical evaluation by Tawazun, the vehicle underwent an array of successful extensive all-terrain tests in the UAE.

Under a special arrangement, Al Jasoor will manufacture the vehicles in Abu Dhabi, using the existing facilities of Tawazun Industrial Park.

He said Tawazun is proud to continuously contribute in meeting the requirements of the UAE Armed Forces, adding that all the partners will be working closely to ensure timely delivery of the vehicles.

Regarding the project, Otokar General Manager Serdar Görgüç said: "Otokar is very proud to be a partner in this important programme, and it shall be a privilege for Otokar to be able to serve the UAE Army and to meet their high standards.

The existing most modern automotive manufacturing facilities of Abu Dhabi is prepared to host the local production of the vehicle in Tawazun Industrial Park.

The 8×8 infantry vehicle comes with an amphibious kit and is capable of withstanding mines and ballistic threats.