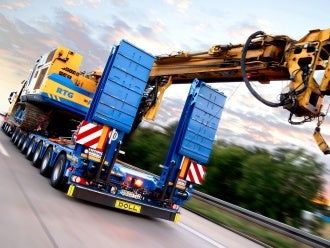 Yet in 2011, Bauer Spezialtiefbau GmbH ordered a six-axle trailer with the newly launched panther technology. Now the choice for its new trailer fell again on the proven single-wheel suspension developed by DOLL.

The first drive of the eight-axle semi low-loader from Berlin to Munich was the transportation of a drilling unit weighing 80t. By purchasing this trailer the company wants to carry especially heavy and bulky loads such as constructional equipment.

The vehicle of type S8E-S2 can be extended from the first axle and is equipped with a 25t compensating gooseneck, double ramps and 12t axles like all panther trailers.

Driver Steve was overwhelmed by the very low-loading height and the newly developed control system, DOLLtronic, which is based on CAN-bus.

The possibility to control all functions from one central station makes handling much easier.