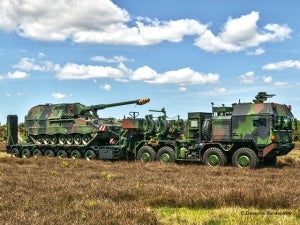 For many decades, DOLL has been delivering a wide range of vehicles to the German Armed Forces. Until today, the company has developed into a reliable partner in terms of wheeled vehicles, due to their high-quality standards as well as expertise.

With the certification according to AQAP 2120, DOLL complemented their integrated quality management, fulfilling the NATO quality standards for production and is today the only trailer manufacturing company who has been accredited with this certificate.

For this reason, DOLL is a comprehensive system supplier for both transport vehicles and related services.

However, in 2008 the prototype of a seven-axle heavy equipment transporter (HET) was tested for its usability and loading capacity on a testing area of the Federal Army.

The result of the testing period was decisive for DOLL to win a highly competitive tender for 19 vehicle units. The semi-trailer itself is equipped with hydraulic pendulum axles to meet the extreme demands in terms of mobility, and is able to carry payloads of more than 70t, such as armoured and unarmoured wheeled, tracked and special vehicles but also ISO containers.

Furthermore, a higher mobility is guaranteed by a compensating gooseneck. The first lot for seven vehicles was already delivered in 2013, whereas the remaining amount of 12 vehicles will be delivered in the course of 2016.

When it comes to semi-trailers, the German Armed Forces awarded another lot for eight units of a three-axle semi-trailer with 30t payload in 2013. Contrary to its ‘big brother’, the trailer is not equipped with pendulum axles but with double wishbone axles of the proven panther series. 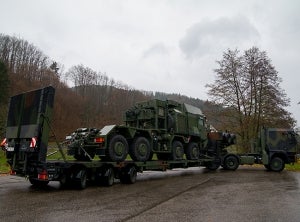 Besides the ability to carry wheeled and armoured vehicles, the trailer scores with its multi-functionality: telescoping frame, lateral extensions, twist locks or equipment to couple vehicles that are not in a roadworthy condition with the help of a towing winch, are just a few examples to illustrate the broad range of applications.

Recently DOLL developed and delivered platform bodies for different payloads and chassis of various truck manufacturers to the Federal Army.

In order to fulfil the requirements concerning payload and mobility, DOLL proposed the two following solutions:

The basic version consists of a subframe with a semi-flexible connection to the main frame. Due to the spring bearing at the front part of the subframe, the platform body is partially decoupled so that distortion of the main frame can be avoided to a certain extend.

For the transportation of any other sensible cargo, DOLL offers a torsion-free version with a three-point support at the intermediate frame, which guarantees a higher decoupling of the distortion between chassis frame and platform body.

The DOLL competencies do not only lie in the manufacturing of transport solutions for military activities but also in retrofitting and modifying existing vehicles.

For instance, DOLL equipped protected tractor units of the German Armed Forces with an adapter changing system for different fifth-wheel couplings and coupling heights, in order to make them more flexible for a wider range of semitrailers.

Tough applications under extreme and harsh conditions provoke that military trailers are extraordinarily stressed. This is why DOLL has specialised in refurbishing and modernising such vehicles after returning from their area of operation.

But also technical developments in the course of a long service life cause technical overhauling. DOLL modernises whole vehicle fleets and refurbishes old vehicles with the latest technologies, in close cooperation with the Federal Army. 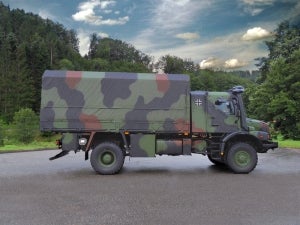 In this way, vehicles regain reliability in use and experience an improvement in efficiency. Some refurbishment examples are two-axle semi low-loaders, which have been in use in Yugoslavia and Afghanistan since the 1990s, as well as antenna masts of the Patriot system.

These vehicles were demounted at the DOLL headquarters in Oppenau, steel components were sandblasted and completely re-painted.

Refurbishment made by DOLL does not only include the overhauling of visible vehicle components, but also comprises the modernising of components lying under the surface, such as hydraulics and electronics.