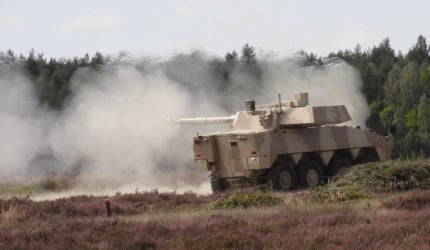 Independent of any and all vehicle manufacturers, CMI Defence is widely recognised for the technical and operational excellence of its products, and its reputation as a reliable partner of modern high-mobility forces stems from its ability to provide fully integrated solutions.

The Cockerill CPWS 20-25-30 turrets are unmanned; remotely operated by a person in the carrier vehicle. The turrets can mount a range of 20mm, 25mm and 30mm automatic cannon with a 7.62mm coaxial machine gun in a ballistically enclosed, power-operated turret. The turret will typically carry 150 rounds of ready ammunition. Twin-feeds may be provided to permit the use of more than one type of ammunition. The weapons are employed using a high performance, digital, fully-stabilised, day/night weapon control system.

The modular Cockerill medium calibre turret is a new generation system. The turret may be remotely operated or manned by a conventional crew. The turret can mount one of a range of 25mm, 30mm, 35mm and 40mm automatic cannon, with a 7.62mm coaxial machine gun. Integrated in a ballistically-protected, power-operated turret, the cannon can elevate to +60° for combat in complex terrain and for the engagement of slow-speed aerial targets.

The light and robust Cockerill CSE 90LP provides a range of highly effective fires accurately delivered around the clock using electrically-powered gun drives and a night/day digital fire control system. The Cockerill CSE 90LP turret can be fitted to a wide range of wheeled and tracked armoured vehicles of 7t and more, and can be precisely tailored according to the user’s requirements and budgetary constraints.

More than 2,300 Cockerill 90mm LP guns are in operation all around the world.

Due to its limited recoil, high/low angles of firing (-10° to +42°), this fully stabilised system is particularly well suited to the demands of modern operations in urban and difficult terrains including beyond-line-of-sight engagements.

Back-up devices are foreseen to allow continued use of the turret in case of loss of electrical power supply.

The powerful Cockerill XC-8 is a low-weight concept-turret. The concept recognises divergent market requirements, specifically for the broad operational flexibility demanded by the medium-tank requirement, and for the narrower, more specialised anti-armour requirement. Thus one of two low-recoil force guns may be fitted in the XC-8.

CMI designs, installs, upgrades and services equipment for energy, defence, steel-making, the environment and other industry in general.

The CSE 90LP weapon system is the latest evolution of the CM90 turret equipped with the famous Cockerill 90mm low-pressure gun.

A module-based weapon system from the Cockerill range designed by CMI Defence, the remotely-operated CPWS (Cockerill Protected Weapon Station) integrates the latest proven technologies along with a range of medium calibre automatic guns (20mm to 30mm).

The Hydra-70 rocket system is a family of 2.75in unguided air-to-surface rockets derived from the Mk 4/Mk 40 folding-fin aerial rocket (FFAR) developed in the 1940s.

The Special-Purpose All-Terrain Vehicle (S-ATV) is the latest member of off-road military vehicles being offered by Oshkosh Defence.

The Arlan 4 x 4 multi-role armoured wheeled vehicle is produced by Kazakhstan Paramount Engineering (KPE) in collaboration with the Kazakhstan military and based on the Marauder mine-resistant ambush protected vehicle produced by Paramount Group, located in South Africa.

Positioning itself regarding the two major US Army initiatives, CMI Defence announced two major initiatives today: it has joined with world-class contractors to compete in the US Army’s MPF programme. It is also delivering a medium-calibre turret within the framework of its CRADA collaboration with the US Army.

Only eight months after the introduction of the world first Unmanned Aerial Vehicle (UAV) integration on a combat turret, CMI Defence is innovating again by presenting this integration on its virtual immersive simulator, marketed under the Agueris® brand, at IDEX 2017.

CMI Defence, Partner of the US Army for the Development of the Future Medium-Calibre System

At the beginning of 2016, CMI Defence was selected by, and in cooperation with, the US Army Armament Research, Development and Engineering Center (ARDEC) for a research and development programme focused on medium-calibre armament systems.

Infantry-led mounted and dismounted operations are in ever greater need of effective fire support.

Infantry-led mounted or dismounted operations are in ever greater need of effective fire support. To help meet that need, CMI Defence and Ukroboronservice have integrated the Cockerill CSE 90LP turret with the BTR- 3E 8x8 vehicle.

CMI Defence presented the Falarick 105, the new anti-tank guided missile launched from the Cockerill CV gun, exclusively at Eurosatory 2010. In Scotland CMI demonstrated the effectiveness and accuracy of the CT-CVTM Weapon System gun-launched missile which confirms the positioning of this turret