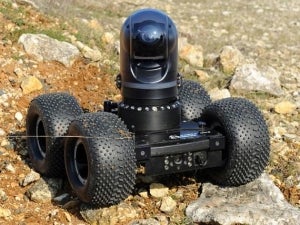 The COBRA Mk2 robot is a certified, combat-proven UGV of which 29 units have been deployed by the French Land Forces in the Middle East combat zone.

COBRA MK2 UGVs will perform counter IED missions such as reconnaissance and neutralization for the Canadian Land Forces. The UGVs will be equipped with a canon support module and a dropping charge module both for IED neutralization.

This contract has been won after some weeks of trials, including competitors, during which the certified "combat proven" COBRA MK2 has been tested by the accredited laboratory of the Canadian Army itself. First deliveries are scheduled for summer 2013.
This, being the first contact won in North America, opens up new future business opportunities.