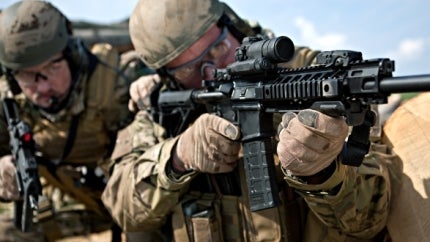 Aimpoint supplies optical devices for civilian, police and military applications. The company strengthened its position as market leader when it was awarded the first multi-year contract ever for red dot sights by the US Army in 1997. Since then, Aimpoint has continued to deliver large quantities of sights to the US Army, French Army, US Airforce, US SOCOM, Swedish Army, Norwegian Army, Dutch Army, Danish Army and Italian Army.

Through this, the company has proven its capability to manufacture and supply large quantities of first class equipment. The Aimpoint sight is also currently in use with Special Forces all over the world and regarded as the standard optical sight in most NATO countries. Aimpoint’s manufacturing facility in Sweden is certified according to the new standard SS-EN ISO 9001:2008.

The Aimpoint® FCS12 is a fire control system for use with weapons such as the CarlGustav and Panzerfaust. The FCS12 system consists of an eye safe 1550nm laser range finder, a ballistic computer with the capability to store up to 50 different ballistic
algorithms, and a parallax free optical channel with unlimited eye relief.

The FCS12 automatically compensates for the ballistic drop of projectiles at measured distances, factoring in variables such as rotational (spin) drift, propellant temperature, and terrain angle.

The FCS system comes with a remote control unit placed on the front grip, and which communicates with the sight via a wireless link.

The Aimpoint® CompM4 series of sights have lately been chosen as the standard infantry soldier sight in many NATO countries. These optics are extremely rugged and operate continuously for up to eight years using a single AA battery. The Aimpoint CompM4 is the latest version of the US Army’s M68CCO (Close-Combat Optic), continuing a legacy that Aimpoint has maintained since 1997.

The Aimpoint® Micro series of sights is small enough to be used in applications where size and weight have limited the applicability of red dot sights in the past. The Micro T-1 is compatible with all generations of night vision devices and can operate for over 50,000 hours on one single battery.

The Aimpoint® Patrol Rifle Optic™ (PRO), is a sight that comes in a complete ‘ready to go’ kit and at a very affordable price. It offers three years of continuous use on one single battery, it is NVD compatible and comes with a QR mount including spacer and flip-up covers; the rear flip-up being transparent.

The Aimpoint® CompM3 and Aimpoint CompML3 are red dot sights for use with small arms. The CompM3 is night vision equipment compatible while the CompML3 is not, but in all other aspects, these products are exactly the same. These sights can be bought in two different dot sizes, two or four minutes of angle (MOA) and can operate for over 50,000 hours on one single DL1/3N battery.

Aimpoint also provides a wide range of accessories. The 3XMag is a magnifying module designed to be compatible with all Aimpoint sights. In addition to the magnifying attachment, Aimpoint has also developed a patented new mount called Aimpoint TwistMount. This allows the operator to switch from semi-sniping to close-quarter battle in a split second.

The Aimpoint® LPI, IR laser aiming device is an active aiming device or target designator for military and LE applications in darkness or poor light conditions. The Aimpoint LPI is a complement to the passive aiming systems from Aimpoint.

The Aimpoint® CEU (concealed engagement unit) gives the operator the ability to observe and/or engage a threat from a concealed or covered position.

Aimpoint is a supplier of sophisticated modular sighting systems, offering a choice of modular accessories that can be used together with Aimpoint sights in order to enhance an operator’s capabilities.

In our System-of-Systems solution, the versatile TwistMount enables accessories such as the Aimpoint 3XMag and the Aimpoint CEU to be rapidly fixed behind Aimpoint sights. NVDs of all generations can also be added as part of this modular system.

Aimpoint – the inventor of the red dot sighting technology 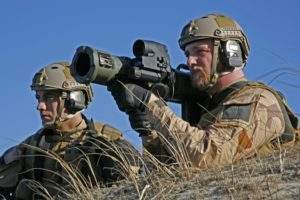 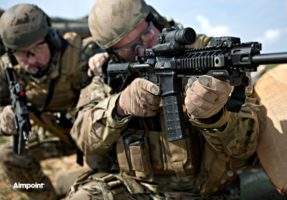 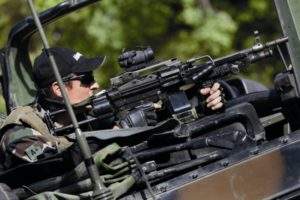 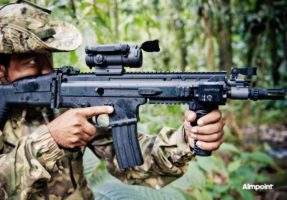 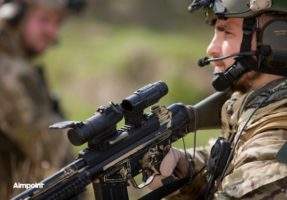 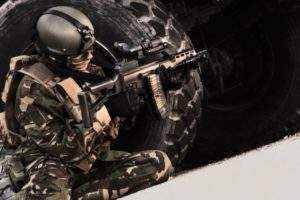 The CompM3 is a very popular sight which is in use with many police and armed forces personnel. 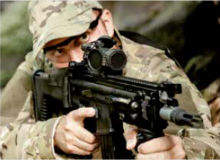 No matter what your mission, the size and weight of your equipment is a critical factor. With the Aimpoint Micro T-1, Aimpoint has introduced an aiming system that provides the performance of our full-sized sights in the smallest package possible.

Designed with input from a distinguished group of current and former professionals, the Aimpoint Patrol Rifle Optic (PRO) incorporates many never before seen features to maximise this sight's performance within the challenging conditions faced by modern law enforcement.

The Aimpoint 3XMag magnifying module is a high quality optic that can be used with any Aimpoint sight for extended range target identification and engagement. 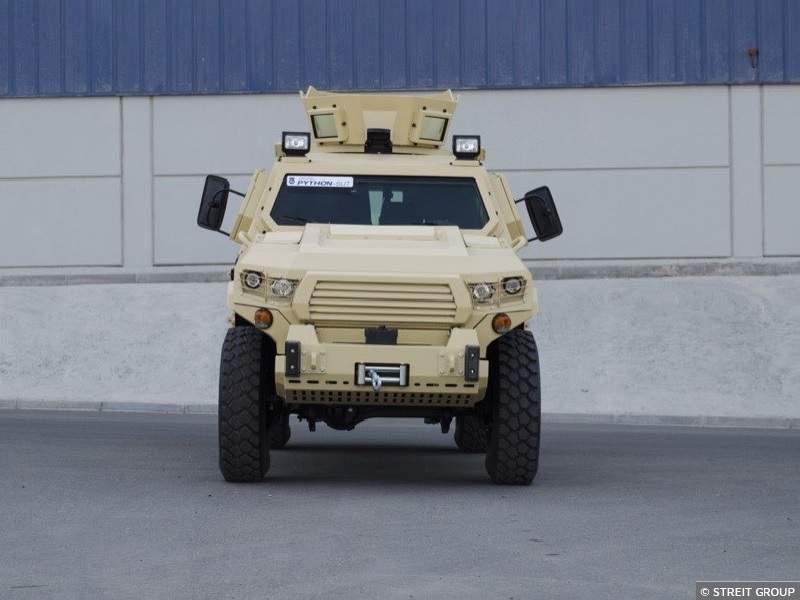 Aimpoint, a leading supplier of electro-optical sighting systems, pleased to announce that it will be attending LAAD in Brazil.

Aimpoint, the originator and worldwide leader in electronic red dot sighting technology, has announced that the company's FCS12 fire control system has successfully passed advanced field trials, and has been placed in active service with the Swedish Army.

We kindly invite you to visit our booth N4-150 at DSEi. Every day of the show at 11am, in our booth, we will demonstrate how the Aimpoint FCS 12 Fire Control System works and explain all the benefits it brings to end-users. An appointment is not necessary, just come along at 1

Aimpoint Deliveries to US Army Surpass One Million Sight Mark

Aimpoint, the originator and worldwide leader in electronic red dot sighting technology, has announced that the company's shipments of M68 Close Combat Optics (at present the Aimpoint® CompM4s) under contract to the US Army recently passed a total of one million sights. Contracts for the M68

Aimpoint AB, the innovator and world leader in electronic red-dot sighting technology is introducing a Fire Control System for handheld and crew-served weapons. The introduction of the Aimpoint® FCS12 follows after a period of intense product development and initial deliveries on a contract

Aimpoint, the originator and worldwide leader in electronic red dot sighting technology, has been awarded a new contract from the US Army for supply of up to 565,783 M68 Close Combat Optic rifle sights. The Aimpoint CompM4s was chosen following an extensive evaluation and competitive trial of ava

Aimpoint, the world leader and innovator of red dot sighting technology, has announced the latest generation of the company s heavy weapon sight the Aimpoint® MPS3. Designed for use on medium to heavy support weapons, the MPS3 sight enables users to quickly bring a weapon on target, and gre

Aimpoint, the innovator and world leader in electronic red-dot sighting technology has announced a new variation of the company s successful CompM4 sight. The CompM4 is currently standardized as the US Army's M68 close combat optic, with over 600,000 units currently in service with the US milita

Highly versatile aiming device allows engagement of threats from behind cover Aimpoint, the world leader and innovator of red dot sighting technology, has announced the introduction of a new modular accessory called the Concealed Engagement Unit, or CEU. The CEU is the latest com

Malmö, Sweden, May 10, 2006 – Aimpoint, the originator and leading manufacturer of electronic red dot sighting technology, has secured a new contract with the U.S. Military for supply of 163,000 rifle sights. The Aimpoint sight was chosen following an extensive evaluation and competitive trial of

Order for 163,000 optical sights. Aimpoint, the originator and leading manufacturer of electronic red dot sighting technology, has secured a new contract with the US Military for supply of 163,000 rifle sights. The Aimpoint sight was chosen following an extensive evaluation and c

New all-time-high order for Aimpoint CompM2 sights Aimpoint®, the world leader and innovator of red dot sighting technology, has been awarded with a new contract for the supply of sights to the US Military, announced Lennart Ljungfelt, President. More than 280,000 Aimpoint

Easy-to-Attach 3XMag – Used in Enduring Freedom Aimpoint®, the world leader and innovator of red dot sighting technology, is introducing a magnifying attachment announces Lennart Ljungfelt, President of Aimpoint. The 3XMag was developed by Aimpoint for profe

The Italian Ministry of Defense has concluded procurement, in international competition, of an optical sight and awarded the Swedish company Aimpoint AB a contract to supply a passive Red Dot Sight system to the Italian Army. The contract is for at least 24,000 Red Dot Sights,

Aimpoint AB is pleased to announce that the US Air Force has selected the CompM2 (M68) passive Red Dot Sight system from Aimpoint AB to go with their M4 carbines. The initial order is for a little more than 20 000 Red Dot Scopes to be supplied over a two year period. The order is an amendment to cur

Aimpoint AB is pleased to announce that the Swedish Defence Material Administration (FMV) has concluded three years of trials and evaluations of numerous optical sights for small arms from manufacturers all over the world, and consequently has awarded a commission to supply a passive Red Dot Sight s