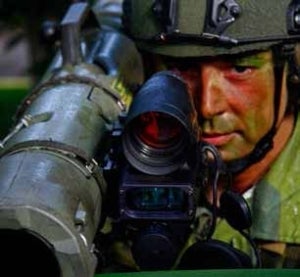 Aimpoint, the originator and worldwide leader in electronic red dot sighting technology, has announced that the company’s FCS12 fire control system has successfully passed advanced field trials, and has been placed in active service with the Swedish Army. The system will be utilised on the 84mm Carl Gustav M3 multi-purpose weapon system built by Saab Dynamics.

The FCS12 incorporates an eye safe 1,550nm laser range finder, as well as sensors that measure aiming angle and environmental conditions to provide the operator a range-adjusted point-of-aim on measured targets.

The built-in computer allows the unit to store ballistic algorithms for up to 50 different munitions, five of which can then be entered on a short list to ensure rapid selection by the operator in a combat situation. After measurement of the distance to the target is initiated by the operator, a compensated point-of-aim is calculated and presented instantly, allowing the operator to fire the weapon immediately.

The most important features of this optic can be accessed using a remote wireless control module that can be operated under stress without removing gloves or requiring the operator to change their grip on the weapon. The FCS12 is built to stand up to harsh field conditions, and its solid state design does not rely on any fragile motors or sensitive moving parts.

"The 84mm Carl Gustav M3 is an extremely versatile and effective weapon system, and now Aimpoint has given M3 operators the advantage of increased speed on target, as well as a high level of probability that their first shot may be the only shot they will need to engage a threat," said Lennart Ljungfelt, president of Aimpoint. "By eliminating user error in distance and terrain angle estimation, the FCS12 actually increases the weapon’s effective range, and greatly increases first hit probability. Aimpoint has invested years of advanced electro-optical science in the development of the FCS12, and we are proud to have supplied this optimised fire control system to the Swedish military."

The FCS12 system is suitable for use on shoulder-mounted rocket launchers such as the Carl Gustav and Panzerfaust, as well as 40mm automatic grenade launchers including the MK19, MK47 and GMG. The system is powered by a quickly changeable internal power pack using replaceable standard AA batteries, and is compatible with all generations of night vision devices.

For more information on the FCS12 please contact Aimpoint.

Elite police and military forces around the world have used Aimpoint® Red Dot Sights for...

Aimpoint, the supplier of electro-optical sighting systems, will be exhibiting at the 2013 Milipol internal...

Aimpoint, a leading supplier of electro-optical sighting systems, is pleased to announce that it will...