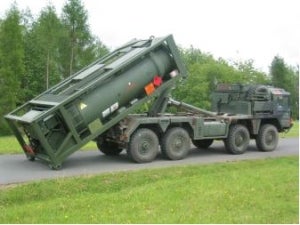 The movement of fuels and water in a conflict area requires flexibility, integrity and the ability to comply with international regulatory codes, Peter Hughes, Business Development Manager for WEW, will say at the Land Warfare Conference being held at the Melbourne Convention and Exhibition Centre from October 29th to November 2nd, 2012.

The use of flatracks, DROPS and PLS has considerably enhanced flexibility particularly in forward bases where there is little or no logistic handling equipment.

This, coupled with the adoption of modular fuel and water systems, now makes it possible to get these two liquids wherever they are needed with virtually no site preparation.

"This has not come without its problems," says Hughes. "Liquids have considerable impact on vehicle dynamics not just because of the weight but also because of their inherent properties. At WEW we have expended considerable effort designing modules which have much stronger integral properties so that we can be confident enough to say that we expect our solutions to have a 30-year life.

"During the design stages we re-designed the frame surrounding the tank so that it took the stress and not the tank with the result that its integrity was maintained, regardless of the number of times that the module was loaded/unloaded using PLS or a hookloader system."

"Movement of fuel and water modules from home locations to a conflict zone can be done in a variety of ways, the most cost effective however is to use the commercial freight system. This considerably reduces costs but does have significant implications," Hughes will say. "The most important of these is to ensuring that the module meets the international safety requirements. WEW has secured worldwide approvals for its modules to utilise the international logistics chain."

During his presentation being given at 13:30 on Friday 2nd November, Peter Hughes will also offer comment about interoperability issues faced by defence forces operating in a coalition arrangement where the fluid logistics solutions have to be useable by all forces."