A Reminder for Your Next Mission: You Cannot Hide in the Desert… 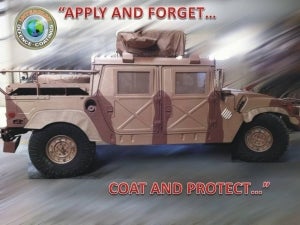 "Deserts take up about one third (33%) of the Earth’s land surface". Land warfare planners and of course soldiers in the field cannot ignore that fact. And desert background is dominant in the majority at some of the "hottest" areas around the world and some of them are surely candidates to host the next Theatre of Operations.

Very high temperatures, flat areas for miles and miles, no trees, no obstacles: No place to cover, no place to hide.

The scenario is trivial: insurgents or "failed states" guerillas, whatever names you give them: they have access to thermal imagers. Just use your favorite e-shop and check it out. Practically anybody can buy a thermal imager and threaten soldier’s lives and multimillion weapon systems day and -most important – night.

More than that: HUMVEES and Tanks, MLRS and SAM’s, Missile Launchers and Command Centers -not to mention Recce, Special Forces and Tactical Intelligence Units- operating in flat desert environment are susceptible to heat-seeking missiles. Spread all over within the Theatre of Operations are a serious threat to all Force-Multipliers deployed.

If you have a quick look around in the desert you will discover more: acres of oil installations, power plants, strategic facilities, airfields, helipads, shelters, gas-tanks, military camps: a perfect high-valued target for salvo missile attacks. The heat-seeking sensors of hundreds and hundreds of missiles that low-tech adversaries are threating to launch, will be activated over the target area at the final approach phase of trajectory and detonate on the "hotter" spots.

Let’s face the reality: No soldier will ever manage or even try to deploy a camouflage net under desert conditions to cover and hide lives, assets and facilities. Simoom, a strong, dry, dust-laden local wind that blows in the Sahara, Palestine, Israel, Jordan, Syria, and the deserts of Arabian Peninsula, the Bad-i-sad-o-bist-roz, named after the dreaded Iranian and Afghanistanian ‘wind of one hundred and twenty days’ or any other strong desert wind make any effort for conventional fabric-based camouflage method useless. You cannot be hidden in the desert…

You can paint military vehicles, military installations and at last: "APPLY AND FORGET, COAT AND PROTECT".

Already proved in harsh desert environment, customized to meet any demand, capable to cover from a single vehicle to a wide area, providing anti-thermal stealth capabilities to valuable assets.

No workload for personnel, no need to carry heavy bunches of fabrics and poles. Now, coating evolves from a mere paint to a countermeasure against thermal imagers and foremost heat-seeking missiles and cruises.

And if your operational plan states that your soldiers should deploy from desert to urban or jungle terrain, Intermat again has the solution: The Self-Adhesive Camouflage System. A simple decal with anti-thermal and visual capability. Just "stick-n-go" but fully camouflaged in a wide spectrum area. Other solutions just provide a visual camouflage but when watched through an easy to get thermal imager, the true vehicle is there to be hit and damaged.

Full anti-thermal capability, visual camouflage performance and a product that soldier is able to change at will, during operations. Deployment from desert to urban or other terrain within less than a couple of hours. Just a small package of Intermat’ Self-Adhesive decals in every military vehicle is enough to enable the "multi-environment" visual and anti-thermal capability and save lives.
So, keep a reminder for your next mission: Intermat can hide you in the desert…