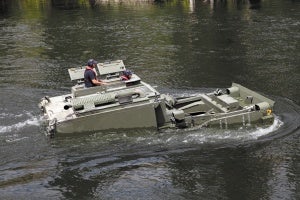 The AZMIM contract – the tender of which was announced by the Undersecretariat for Defense Industry (SSM) to meet the requirement of Land Forces Command and the design, development and production of which is realised by domestic capabilities – was signed between FNSS Savunma Sistemleri A.Ş. and SSM on 10 March 2009.

AZMİM, which is the Turkish MoD’s second design and production project in the land vehicles sector following the mobile amphibious assault bridge (SYHK) project by FNSS, is a system designed for preparing river banks (slope, width soil hardness, surface smoothness, etc.) suitable for entry of the amphibious vehicles into water during river crossing operations to be performed by the armed forces. Furthermore, it is the only armoured and amphibious engineering dozer in-service worldwide.

AACE is an amphibious, armoured, tracked, combat earthmover to be used for the preparation of the river banks in crossing over operations. It is capable of performing bulldozing, rough grading, excavating, hauling and scraping operations.

Compared with standard work machines, AACE has the capability to take in ballast from the soil ground to its ballast canister when necessary and discharge it at the end of the operation. In standard work machines, the dozer blade is swinging while the vehicle is stable however in AACE it is fixed to the vehicle. With its superior hydraulic suspension system, the front side of AACE can be lifted down or up and by this way its blade or ballast canister can touch and access the ground. As a result, more efficient shoveling and plowing can be made. These activities can also be made while the vehicle is mobile.

One of the most important features AACE has is that it is amphibious and has the capacity for two crews. In addition, AACE has modern electronic systems, such as day and night cameras, multi-function LCD monitor and air-condition. The hull of AACE was designed with aluminium material by taking into account its floating requirements and ballistic protection at the same time. Its hydraulic, power and power transmission systems are equipped with modern equipment and tools; therefore, the vehicle has higher manoeuvre capability and performance.

At AACE’s powerpack assembly, Allison full automatic transmission is coupled with a Cat diesel engine. AACE can move at a speed of 45km/h on land and can reach the operation area together with other military vehicles without need for transportation. It can travel safely in river streams up to 1.5m/sec with 360° high-maneuvered capability through its two water jets.

AACE is FNSS’s local development and manufacturing type project, which aims to meet the requirements of Turkish Land Forces. The project was signed on 10 March 2009 and has been effective since 15 June 2009. The total project time is 42 months. FNSS is responsible for the delivery of 12 vehicles in total, including one prototype for qualification tests and approval.