Uncategorised
Is Ukraine’s Brimstone use behind the UK’s Project Wolfram? 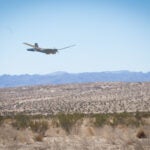 The Anka unmanned aerial vehicle (UAV) has been operational with the Turkish Air Force since 2017. Developed by Turkish Aerospace Industries (TAI), the UAV is designed to meet the reconnaissance, surveillance, target recognition, and detection requirements of the Turkish Armed Forces.

The combat drone is powered by a 150hp turboprop PD170 engine developed by Turkish Engine Industries (TEI). It has a maximum take-off weight of 1,600kg, maximum altitude of 30,000ft, and endurance of more than 24 hours.

Designed and developed by Northrop Grumman, the MQ-5B Hunter multi-mission unmanned aircraft has been operational with the US Armed Forces for the last two decades, meeting all the standards set by the US Department of Defense.

The Hunter UAV is capable of carrying a total payload of 226.8kg. It can carry multiple sensors such as electro-optical (EO)/infrared (IR) and communication systems in addition to external weapons such as Northrop Grumman Viper Strike laser-guided munition.

Powered by a heavy fuel engine, the MQ5B Hunter has a maximum take-off weight of 884.50kg and a maximum service ceiling of 18,000ft. The unmanned aircraft can reach a maximum speed of 120k and endure for 21 hours. MQ-5C e-Hunter, a larger version of the MQ-5B, is capable of remaining airborne for up to 30 hours.

The medium-altitude long-endurance (MALE) aircraft can endure for 32 hours and cruise at a maximum speed of 199k. It has a maximum take-off weight of 4,200kg and a service ceiling of 32,480ft.

The MQ-1C Gray Eagle unmanned aircraft system (UAS) was developed as part of the US Army Aviation modernisation plan. Designed by General Atomics Aeronautical Systems (GA-ASI), the aircraft is used to meet the reconnaissance, surveillance, and target acquisition (RSTA) requirements.

The UAS is designed to carry a total payload of 488kg while its full fuel and external payload capacities are respectively 261kg and 227kg. The combat drone version can carry four Hellfire missiles. Other payloads include EO/IR sensors, synthetic aperture radar, and communication relay sensors.

Powered by Thielert 165 HP heavy-fuel engine, the MQ-1C Gray Eagle has a maximum take-off weight of 1,633kg. The maximum permitted altitude and a maximum speed of the UAV are 29,000ft and 167k, respectively. The UAS has a maximum endurance of 25 hours while the extended range version offers an endurance of 40 hours. The Yabhon United 40 MALE aircraft, also known as Smart Eye 2, is designed and developed by UAE-based manufacturer ADCOM Systems. The aircraft is in service with Algerian Forces and locally named as Algeria 54.

The multi-mission UAV is capable of carrying a maximum payload of 1,000kg, which includes sensors and surveillance systems such as camera platforms, synthetic aperture radar (SAR), and sonar. The combat drone features four pods under the wing for carrying ammunition weighing up to 400kg. The unmanned aircraft also has provision for additional fitment of external payload near the belly of the fuselage.

Powered by a hybrid turbine-electric propulsion system, the aircraft can reach a maximum speed of 118k and can remain airborne for 120 hours. The maximum permissible take-off weight of the aircraft is 1,500kg. The CH-5 UAV, also known as Rainbow UAV, is designed and developed by the China Aerospace Science and Technology Corporation (CASC). The unmanned aircraft was introduced first in November 2016 and resembles the US-made MQ-9 Reaper drone.

The combat drone is capable of carrying out combat missions, reconnaissance, surveillance, patrol, and target positioning. It has a maximum take-off weight of 3,300kg and payload capacity of 1,200kg. The hard-points on each wing can be attached with a quad pack of AR-2 SAL guided anti-armour missiles and two twin-packs of AR-1 SAL missiles.

Powered by a 330HP single engine, the aircraft can reach a speed of 118k and offer a maximum endurance of 60 hours.

The Predator B (MQ-9 Reaper) UAS is in service with the US Air Force, Nasa, the Royal Air Force and the Italian, French and Spanish air forces. Developed by GA-ASI, the remotely piloted aircraft (RPA) is designed to comply with the STANAG 4671 Nato standards.

The Predator B combat drone is twice as fast as its predecessor Predator and can carry 500% more payload. It is capable of reaching maximum altitudes up to 50,000ft and has a maximum speed of 240k and endurance of 27 hours. The MQ-9B SkyGuardian RPA will enter service with the Royal Air Force as part of its Protector RG Mk1 programme in 2020. Developed by GA-ASI, the UAV is designed in accordance with the Nato STANAG 4671 UAV system airworthiness requirements and the UK Def Stan 00-970 design and airworthiness standards.

The UAV has a maximum take-off weight of 5,670kg and features nine payload stations, which can hold a maximum payload of 1,814kg. It is capable of carrying combat payloads such as 500lb GBU-12 Paveway II laser-guided bombs and/or AGM114 Hellfire missiles.

The SkyGurardian RPA features detect and avoid (DAA) system developed by GA-ASI. It is capable of flying at altitudes above 40,000ft with maximum speeds of 210k and remaining airborne for more than 40 hours.

Heron TP, also known as Eitan, is an automatic taxi-take-off and landing (ATOL) drone designed and developed by Israel Aerospace Industries (IAI). The combat drone is in service with the Israeli Defence Force (IDF).

It is capable of carrying a maximum payload of 2,700kg, which includes multiple mission systems such as synthetic aperture radar (SAR), Global System for Mobile communications (GSM), communication intelligence sensors, and combat payloads such as guided bombs and air-to-ground missiles.

Powered by a single Pratt and Whitney PT-6A 1,200bhp engine, the aircraft can endure for more than 30 hours while flying at a maximum speed of 220kt. The maximum permissible take-off weight of the aircraft is 5,670kg.

The Predator C Avenger is a remotely piloted aircraft developed by GA‑ASI. The first flight of the aircraft was conducted in April 2009. The combat drone has a maximum take-off weight of 8,255kg.

The Predator C Avenger offers greater operational and transit speeds than Predator B aircraft. Powered by Pratt and Whitney PW545B turbofan engine, the combat drone is capable of reaching altitudes up to 50,000ft. It has a maximum speed of 400k and endurance of 20 hours.