Expand
The Valanx family of vehicles from the BAE Systems-led team is one of the six contenders for the Joint Light Tactical Vehicle (JLTV) programme.
BAE Systems-led team delivered seven JLTV prototype vehicles and four companion trailers for the Technology Demonstration phase of the JLTV programme.
A Valanx JLTV (Joint Light Tactical Vehicle) during the JLTV Technology Development phase. 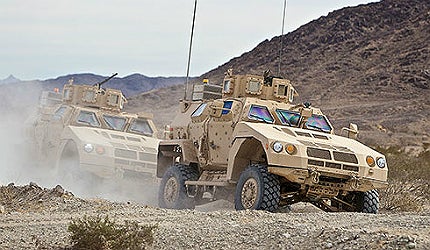 Valanx is a Family of Vehicles (FoV) being developed by the BAE Systems-led team for the Joint Light Tactical Vehicle (JLTV) programme of the US Army, USSOCOM and Marine Corps. The JLTV programme will replace the ageing fleet of Humvees, with a family of new vehicles offering more survivability and high performance.

In October 2008, the team of BAE Systems, Navistar Defence and Meritor Defence was awarded one of three contracts by US Army TACOM LCMC to participate in the 27-month Technology Demonstration phase of the JLTV programme.

"Valanx is based on a fully integrated, low risk modular design allowing the modifications for present and future combat scenarios."

The EMD phase of the programme had also received five bidding proposals from other competitors by March 2012. The vehicles being proposed are the Lockheed Martin JLTV, General Tactical Vehicles’ JLTV Eagle, Oshkosh’s L-ATV, Navistar’s Saratoga and AM General’s BRV-O.

Valanx is based on a fully integrated, low risk modular design allowing the modifications for present and future combat scenarios. The system architecture can integrate future upgrades, such as hybrid / electric drive propulsion for greater fuel efficiency.

The modular construction also accepts improvements in the areas of vehicle electronics and protection. The open architecture allows ‘plug-and-play’ advancements.

Valanx has an overall length of 5.5m, width of 2.4m and an operational height of 2.8m. It accommodates four crew members and can carry a payload of 1,587kg.

The base variant is armed with no specific weapon system. The vehicle is mounted with an armoured turret, which can be fitted with a 12.7mm or 7.62mm machine gun.

"In March 2012, the BAE Systems-led team submitted a proposal for the EMD phase of the JLTV programme."

The vehicle is provided with maximum volume of under armour. The V-shaped aluminium / titanium hull offers superior integral vehicle protection comparable with the MRAP range of vehicles.

The V-shaped underbelly optimises the protection by deflecting the mine blast away from the vehicle.

Valanx is provided with an integral A-kit armour package. The vehicle can be hinged with additional B-kit armour for enhanced protection. The under-body can withstand the blasts of improvised explosive devices (IEDs) and anti-tank mines.

Valanx is powered by a Ford Power Stroke 6.7l turbocharged diesel engine. It delivers higher fuel economy and more superior horsepower and torque than any engine in its class.

The engine is also being used in F-Series Super Duty trucks of Ford Motor Company.

The ride height of the vehicle can be adjusted to achieve a ground clearance of 178mm to 610mm. Valanx can be transported by road, rail, sea and air.