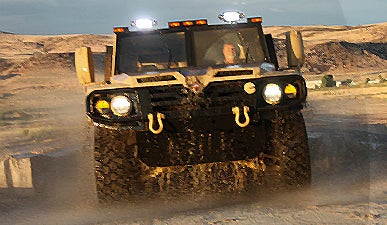 International Saratoga is a light tactical vehicle developed by Navistar Defense. The vehicle was designed to fill the gap between the Humvee modernized expanded capacity vehicle (MECV) and joint light tactical vehicle (JLTV) programmes. Saratoga is a multirole vehicle designed to deliver protected mobility and transportability for the troops operating in threat environments.

In October 2011, Navistar Defense launched the Saratoga light tactical vehicle at the Association of the United States Army (AUSA) Annual Meeting and Symposium.

In March 2012, it submitted a bid for the US JLTV programme. The company is offering a variant of the Saratoga light tactical vehicle for the JLTV. JLTV is a joint programme of the US Army and Marine Corps to replace the ageing Humvee fleet with a new family of vehicles.

"JLTV is a joint programme of the US Army and Marine Corps to replace the ageing Humvee fleet with a new family of vehicles."

Saratoga incorporates a modular design to allow the integration of future systems. The flexible platform enables the manufacturer to quickly develop new variants at low costs for satisfying customer requirements. The standard Saratoga design has been modified to meet the requirements of the JLTV programme.

The conventional vehicle layout houses the engine forward, crew cab in the centre and open cargo compartment at the rear. The crew cab can accommodate four passengers plus an optional gunner. A roof hatch is provided on the vehicle to use the weapon mounted on the top of the vehicle.

The Saratoga has a length of 5.7m, width of 2.4m and a height of 2.1m. The curb weight of the vehicle is 6.7t. It can carry a payload of 3.26t. It can also tow trailers or light artillery units. The vehicle has a high degree of commonality with Navistar fielded vehicles.

The Saratoga accepts multiple weapon systems. The tactical vehicle can be armed with roof-mounted 7.62mm or 12.7mm machine guns or a 40mm automatic grenade launcher. It can also be mounted with a remotely controlled weapon station.

"The Saratoga is powered by a MaxxForce D6.0L V8 6-litre turbocharged diesel engine developed by Navistar."

The vehicle can protect the crew from small arms fire, artillery shell splinters, mine and IED blasts and other emerging threats. The armour suite includes metallic or ceramic armour.

The protection suite is designed to meet the load limits without sacrificing payload capacity, performance and manoeuvrability. The floor height was increased as high as possible for effective blast protection. The vehicle is also equipped with fire suppression system as a standard feature.

The proprietary survivability solution designed for the vehicle was successfully tested by the manufacturer. The solution was developed using key technologies in material mix, vehicle structure and hull shape.

Engine and mobility testing of the International Saratoga

The Saratoga is powered by a MaxxForce D6.0L V8 6-litre turbocharged diesel engine developed by Navistar. The engine coupled to Allison 2100 SP 6-speed automatic transmission develops a power of 340hp. The JP8/military fuel compatible engine is equipped with an electronic control module (ECM).

The vehicle underwent more than 40,000km of automotive testing. It demonstrated superior mobility during the tests. The vehicle is equipped with fully independent air spring suspension with variable ride height control.

The Saratoga has high ground clearance, but can be knelt down for its transportation by air and for storage on ships. The central tyre inflation system fitted to the vehicle improves the ride quality on uneven surfaces.