Protection from mines and IEDs 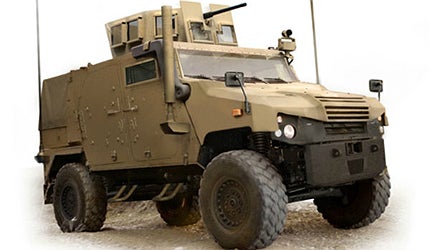 JLTV Eagle is a light tactical vehicle being developed by General Tactical Vehicles (GTV) for the Joint Light Tactical Vehicle (JLTV) programme in the United States. JLTV is a joint programme of the US Army and Marine Corps to replace the ageing fleet of Humvees with a new family of vehicles.

GTV is a joint venture, formed in 2007 by General Dynamics Land Systems and AM General to contend for the JLTV programme. The joint venture company won one of three JLTV technology development contracts in October 2008.

"JLTV is a joint programme of the US Army and Marine Corps to replace the ageing fleet of Humvees with a new family of vehicles."

In July 2010, GTV delivered two right-hand operation JLTVs, one companion trailer and other equipment for TD phase testing in support of the US and Australia’s Land Force Capability Modernization (LFCM) Project Arrangement (PA).

The project arrangement allows the tactical vehicle interoperability and consolidation between US and Australian land forces.

In January 2012, the US Army TACOM Life Cycle Management Command issued a Request for Proposal for the EMD phase of the JLTV programme. The army intends to award up to three contracts in the EMD phase.

Eagle IV platform and features of the military vehicle

JLTV Eagle is a modified non-development vehicle based on the combat proven Eagle IV platform. It incorporates a lightweight hull with a low-profile and blast-resistant structure.

The vehicle has a conventional layout with the engine in front, crew cab in the middle and cargo compartment at the rear. Either side of the hull is provided with two doors for entry and exit of crew and occupants.

The digital cockpit is equipped with state-of-the-art C4I technologies for connecting the crew with other units on the battlefield. The baseline equipment includes air conditioning system, runflat tires and preheat unit.

The base line variation of JLTV Eagle is equipped with no standard weapon system. The vehicle can be armed with weapons such as a 7.62mm or 12.7mm machine gun or a 40mm automatic grenade launcher, depending on the customer’s requirement.

Engine and mobility of the JLTV programme contender

The JLTV Eagle is equipped with combat proven propulsion systems delivering a high horsepower-to-weight ratio. The vehicle is powered by a Cummins diesel engine coupled to an Allison transmission system.

"GTV is a joint venture, formed in 2007 by General Dynamics Land Systems and AM General to contend for the JLTV programme."

The vehicle demonstrates high levels of cross-country mobility, while meeting the survivability and transportability requirements. The vehicle is fitted with a new semi-active suspension (SAS) system. The system successfully went through 80,000 miles of secondary and off-road testing.

SAS has a ride-height adjustment feature to provide smooth ride performance for the occupants. The suspension can automatically increase or decrease the height of the vehicle’s four corners independently according to the changing road conditions.

The vehicle can be shipped through all amphibious assault ships and can be loaded on to most of the cargo decks of on roll-on / roll-off ships and other military transport vessels.