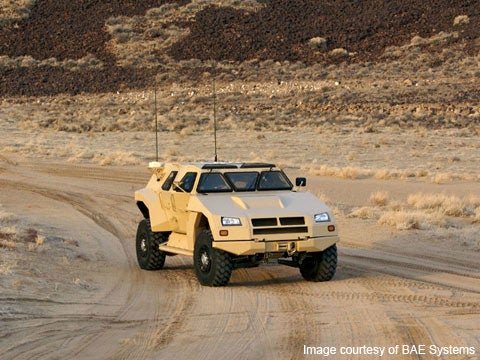 The US Army and US Marine Corps (USMC) have received five bids for the 27-month long Engineering and Manufacturing Development (EMD) phase of their Joint Light Tactical Vehicle (JLTV) programme.

Oshkosh Defense is bidding for the first time, while Navistar and BAE Systems, which paired for the technology development (TD) phase, are now competing separately for the contract award.

The BAE Systems-led team, including Northrop Grumman and Meritor Defense, has offered the Valanx vehicle and also announced the selection of an engine designed and built by Ford Motors.

BAE Systems JLTV Capture lead Glenn Lamartin said, "Our JLTVs are protected and survivable, light enough for transport by air or sea, and agile on road and off."

Lockheed Martin, which was one of three teams to secure the JLTV TD phase contract, has submitted a substantially lighter and more affordable proposal for the programme.

General Tactical Vehicles (GTV), a joint venture between General Dynamics Land Systems (GDLS) and AM General, is also competing for the contract with a Double-V hulled Eagle vehicle, which has proved effective against roadside bombs in Iraq and Afghanistan.

Navistar Defense is bidding with a variant of its Saratoga light tactical vehicle, which was launched by the company after conducting its own automotive and blast testing in October 2011.

Oshkosh is offering a variant of its latest generation Light Combat Tactical All-Terrain Vehicle (L-ATV) that has been extensively tested and proven to meet or exceed all of the JLTV programme’s requirements.

As outlined in the Request for Proposals (RFP) announced on 03 October 2011, the US Department of Defense (DoD) plans to award up to three contracts for the EMD phase.

The army plans to acquire at least 50,000 vehicles with options for additional vehicles, while the Marines could buy 5,500 vehicles.

The JLTV is being developed to replace Army and Marine Corps’ rapidly ageing High-Mobility Multipurpose Wheeled Vehicles (HMMWVs), which have been in service for over 25 years.