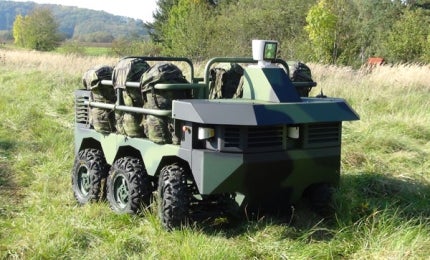 TAROS V2 is a 6×6 wheeled, unmanned, all-terrain, modular and automated robotic ground vehicle unveiled in December 2014. The vehicle was developed by VOP CZ in collaboration with its subsidiary Centre for Advanced Field Robotics (CAFR), and Tactical Department of the Faculty of Military Leadership of the University of Defence in Brno.

The TAROS V2 provides combat and logistic support in high-risk areas and complex environments. It was developed under the 21st century Soldier Programme for the army of the Czech Republic (ACR).

The TAROS V2 is identical to the Lockheed Martin Squad Mission Support System (SMSS) in appearance and functionality. The vehicle is also available in a 4×4 configuration, which can be upgraded to 4×4, 6×6 and 8×8 remote-controlled configurations. The enlarged configurations can be fitted with a range of accessories, including weapon, robotic or sensor systems. The vehicle’s design offers low operating and logistics costs.

In all configurations, the vehicle is powered by accumulators of the 4×4 module. The module can be recharged by the ND 6050D charger powered by a combustion engine housed in the 2x2E module.

The 4×4 module also houses command-and-control electronics and a modular sensor suite. An additional 2x2R module with a remote-controlled knuckle boom crane can expand the operating capabilities of the unmanned ground vehicle (UGVs) for remote-controlled operations in the high-risk environments.

Each wheel of the UGV is equipped with 10kW electro-motor drive-train, transmission and suspension systems, as well as an electro-mechanical actuator for steering. The damaged wheels or electro motor of the vehicle can be easily be replaced by the soldiers using onboard tool kit.

The TAROS V2 is armed with a remote controlled gun carriage developed by the Defence University in Brno. The gun carriage can accommodate personal weapons such as a CZ 805 BREN automatic assault rifle.

CUTLASS is the latest generation unmanned ground vehicle (UGV), designed, developed and manufactured by Northrop Grumman in the UK..

The robotic weapon system weighs 13kg and is powered by 36V electric system.

The TAROS V2 is powered by electric/hybrid propulsion system. Each wheel is driven by an electric motor, which develops a power of 4.8kW.

The vehicle can be used as a standard load-bearing platform, a forward operational platform to launch and recover micro-unmanned aerial vehicles (UAVs), a mobile communications command post and a land mine / IED detection system.