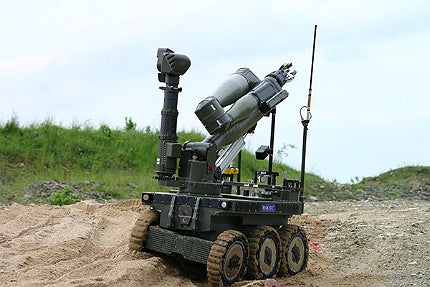 The CUTLASS vehicle has proven to be perfect and capable in critical situations. CUTLASS was exclusively deployed in the UK for counter terrorism operations and is now being offered for international markets.

Design of the unmanned ground vehicle

"CUTLASS was exclusively deployed in the UK for counter terrorism operations and is now being offered for international markets."

The highly versatile design of CUTLASS enables the integration of a wide range of sensors, payloads and tools to perform the full range of operations required for EOD and other applications. The latest technology incorporated in the modular design allows the user to safely detect and dispose explosive ordnance from distance.

The manipulator arm of CUTLASS includes a three-fingered gripper with jaw opening of 0.12m. It replicates the movements of human arm. The arm has nine degrees of freedom for greater movement and agility within confined spaces, such as interiors of vehicles. The specialised sensing system aboard the arm ensures a high level of control to prevent damage to property and forensic evidences.

CUTLASS is also designed to be suitable for all climates with temperatures ranging from -15°C to +60°C. It can resist dust, rain, vibration and shock. The vehicle also comes with a full safety case for firing and movement.

CUTLASS is equipped with a tool rack with automatic tool change option for eight tools / weapons. This option enables the UGV to conduct operations without the help of controller to change the tools manually. It also saves the time to return to control point for new tools and eliminates the need for deploying two standard UGVs.

"Northrop Grumman received the contract for 80 CUTLASS vehicles from the UK Ministry of Defence in 2006."

The vehicle is fitted with seven colour cameras. Each of the lower, upper and rear drives is fitted with a single camera. Dedicated cameras are provided on both manipulator and WSA. A gripper and a disposable camera are also fitted.

The UGV is additionally fitted with an optional ten-times zoom pan and tilt camera. An on-board microphone further enhances the situational awareness of CUTLASS.

The manipulator arm fitted to the vehicle can lift 25kg at full reach. It can be replaced with a heavy duty arm capable of lifting 100kg or handling large weapon shocks.

The wireless line of sight (LOS) control range of the CUTLASS is more than 2.5km. The vehicle can also be controlled by fibre optic link which comes with improved fibre cable management. The length of the cable ranges between 220m and 500m (optional). The onboard colour cameras are accessed by portable command console or optional 21" touchscreen. The additional sensors aboard the vehicle use an exclusive data channel such as Ethernet for communication.

Power and mobility of CUTLASS UGV

The CUTLASS UGV is powered by a 42V lithium ion battery, allowing up to three hours of operation, depending on the mission. The battery can be quickly charged in just two hours. The six braked 200Nm hub motors make the vehicle powerful enough for tough operations.

CUTLASS offers good mobility on hard and soft surfaces and in all weather conditions. The robot is able to move at cautious speeds for sensitive operations and may accelerate to high speeds up to 11km/h when needed. The terrain mobility of the vehicle is more than four times faster than other UGVs.

The UGV can climb obstacles of 0.3m and can cross a gap of 0.5m. The turning radius of the vehicle is 1.38m. The vehicle can ford a depth of 0.3m. The six braked 200Nm hub motors ensure the stair climb at 38°. The airless tires provide suspension and grip for the vehicle. The automatic stability system of the vehicle consists of pitch, roll and load sensors on wheels for providing stability and preventing falls.