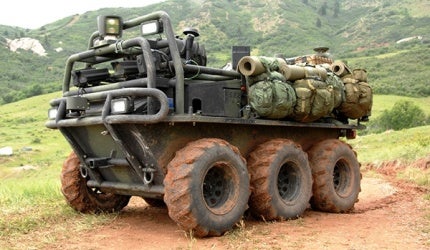 The SMSS (Squad Mission Support System) is an autonomous Unmanned Ground Vehicle (UGV) manufactured by Lockheed Martin, for the US armed forces. It is the largest autonomous UGV ever deployed with the US forces.

The SMSS unmanned vehicle is primarily designed to provide logistics support for light and early-entry forces.

"The SMSS unmanned vehicle is primarily designed to provide logistics support for light and early-entry forces."

The SMSS was developed as an independent research and development project funded by Lockheed Martin. The vehicle was unveiled at the the AUSA 2006 exhibition. It was first evaluated during the Army Expeditionary Warrior Experiment (AEWE) in 2008. A military utility assessment was conducted at Fort Benning in 2009.

The vehicle demonstrated its capabilities during the Portable Power Excursion (PPE) tests in late 2010. The second AEWE evaluation was conducted in 2011.

After winning the Army-sponsored Project Workhorse UGV competition, the SMSS was selected in July 2011 by the US Army Rapid Equipping Force for a three-month Military Utility Assessment (MUA) in Afghanistan. Four SMSS Block I vehicles were trailed during the in-theatre assessment.

The SMSS was also assessed by the British Army in 2012. The vehicle was granted six safety releases by the US Army to work in close proximity around soldiers.

Lockheed Martin is developing a family of light tactical vehicles for the JLTV programme.

The SMSS is based on the six-wheeled amphibious ATV Land Tamer platform. The modular design allows the vehicle to be modified as transport, scout, mobile power and mobile communications platform.

The SMSS sensor suite integrates Light Detection And Ranging (LIDAR), infrared and a colour camera. The vehicle can lock-on and follow any person by identifying his 3D profile captured by the onboard sensors. The SMSS autonomously navigates through a pre-programmed route using GPS way-points.

The SMSS Block I vehicle can be controlled through supervised autonomy, voice, tele-operation or by manually driven modes. The operator control unit includes a computer, control/display unit, batteries and antenna. The unit can be carried in the standard modular lightweight load-carrying equipment (MOLLE) system.

The SMSS is intended to reduce the load of the nine to 13-man squads or teams by transporting their equipment, supplies, arms and ammunition on unpaved roads and cross-country terrains.

The autonomously operated vehicle will save the time utilised by the warfighter to control robotic systems. The reliable squad-size vehicle enhances the combat readiness by ensuring the re-supply channels and casualty evacuations. The future armed variants will feature improved reconnaissance, surveillance and target acquisition potentialities.

"The highly mobile 6×6 vehicle is ideal for asymmetrical and urban battlefields."

The SMSS is powered by a 60hp or 80hp turbo diesel engine. The UGV is equipped with hydraulic/gear drive system. Each hydraulic drive motor driven by an independent pump of the tandem pump set up delivers torque to the three wheels on either side of the vehicle.

The drive system of the UGV delivers more power to the wheels than other hydraulic vehicles with a hydraulic wheel motor at each wheel. The SMSS drive system components are housed inside the hull to withstand the impact of water, mud, dust and rocks.

The highly mobile 6×6 vehicle is ideal for asymmetrical and urban battlefields. It can support the squad to carry out various missions on most dangerous terrains. The SMSS Block I vehicle has a range of 200km. The vehicle can negotiate a vertical step of 0.55m and trench of 0.7m. It can be internally transported by CH-47 Chinook and CH-53 helicopters.