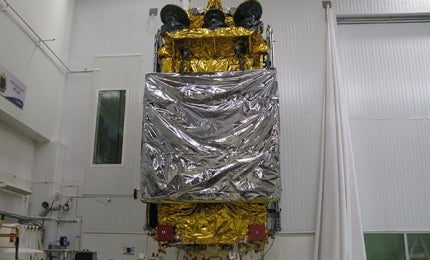 Sicral 2 is a military communications satellite designed and manufactured by Thales Alenia Space for the Italian Defence Ministry and the French armament agency Direction Générale de l’Armement (DGA), who respectively funded 62% and 38% of the project.

The satellite was launched from the Guiana Space Centre using an Ariane 5 launcher in April 2015. It is placed in a geostationary orbit at 37° east longitude for providing strategic and tactical telecommunications links for Italian and French military forces. It also offers reserve capacity for other Nato nations.

As part of Sicral multi-satellite constellation, Sicral 2 enhances the satellite communications capabilities offered by the existing satellites, including Sicral 1 and Sicral 1B launched for Italy in 2001 and 2009 respectively, as well as Syracuse 3A and 3B launched for France in 2005 and 2006 respectively.

Thales Alenia Space was awarded a contract to design the entire Sicral 2 system. The contractual scope included development, integration and testing of the Sicral 2 satellite.

"The satellite was launched from the Guiana Space Centre using an Ariane 5 launcher in April 2015."

The company also provided advanced equipment including processors and antennas for the payloads of UHF and SHF band. The satellite was developed at Thales Alenia Space’s facilities in Rome, l’Aquila, Cannes and Toulouse, and was integrated at Rome and Turin plants. Its environmental tests were performed at Cannes plant.

Thales Alenia Space Italia and Telespazio were awarded a €295m ($315.2m) contract for the development of the Sicral 2 satellite and ground segment in May 2010.

Sicral 2 is based on the SpaceBus 4000 B3 platform developed by Thales Alenia Space. It has a launch mass of 4,360kg and dry mass of 1,910kg. It includes solar arrays, which can generate approximately 7kW of power. The satellite is expected to have an operational lifespan of more than 15 years.

In February 2014, Thales Alenia Space received a contract from DGA to provide operational support services for the Sicral 2 system jointly with Thales and Telespazio.

Telespazio is responsible for the launch service. Arianespace was selected in December 2010 to launch the satellite aboard the Ariane 5-ECA.

The Ariane 5-ECA launcher variant is powered by a cryogenic core stage and two solid rocket boosters during the initial flight phase and ESC-A cryogenic upper stage using an HM7B engine for the injection of the payload into orbit. The lift-off weight of the launch vehicle is 780t.

The satellite has three payloads, including a UHF-band payload for the Italian mission and two SHF payloads for the Italian and French missions, respectively. It also uses EHF/Ka band remote control, telemetry and ranging system.

Thales Alenia Space developed the ground segment architecture and mission control centres. Telespazio was contracted to manage ground segment design, implementation, integration and testing phases of the satellite control centre at Vigna di Valle in Rome for the main system and at the Fucino Space Centre (L’Aquila) for the back-up system. The company is also responsible for the interconnection system between the Italian and French mission centres.

The Sicral multi-satellite-based communication system also includes the Inter-Force Command and Control Centre (CIGC) in Vigna di Valle, with one of its redundant elements located in Fucino.