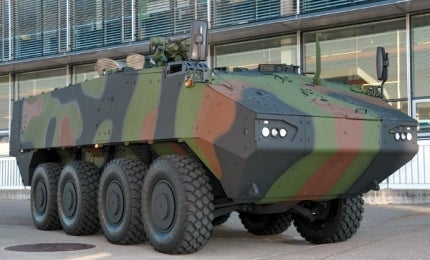 PIRANHA 3+, a new generation, armoured, wheeled vehicle of the PIRANHA family, was unveiled at the EUROSATORY Land and Airland Defence and Security international exhibition held in Paris, France, in June 2014.

The vehicle is produced by General Dynamics European Land Systems (GDELS) in both amphibious and non-amphibious versions. Developed based on the field experience gained from the existing PIRANHA 3 vehicle fleet, the PIRANHA 3+ is designed to offer greater crew protection and high manoeuvrability. It features higher payload capacity than its predecessor.

The PIRANHA 3+ armoured wheeled vehicle incorporates an ergonomic design with an all-welded armoured hull. The modular design has inherent growth potential for meeting the future needs of the clients.

"The PIRANHA 3+ is designed to offer greater crew protection and high manoeuvrability."

The vehicle is 7.77m in length, 2.31m high and 2.8m in width. It has a ready-to-operate weight of 17t, gross weight of approximately 27t and payload carrying capacity of up to 10t.

The PIRANHA 3+ is operated by a three-man crew, including a driver, a gunner and a commander. It also accommodates up to ten infantry soldiers. The vehicle is installed with combined nuclear, biological, chemical (NBC) / air-conditioning system, and fire extinguishing system for engine and crew section. It can be optionally fitted with a self-recovery winch, auxiliary power unit, health and usage monitoring system (HUMS) and J1939 Automotive CANBUS with MILCAN interface.

The Textron Tactical-Armoured Patrol Vehicle is a 4×4 wheeled combat vehicle, which is designed and being developed by Textron Systems.

The vehicle’s modular protection system offers superior protection for the occupants against ballistic threats, mines and IEDs. It can be equipped with signature reduction features and a RPG (rocket-propelled grenade) protection kit to protect the crew from RPG rounds.

The PIRANHA 3+ armoured vehicle is powered by a Caterpillar C13 engine, which generates a power of 383kW and a torque of 2,200Nm. It is coupled to ZF automatic transmission system with seven forward and reverse gears. The engine burns F-54 diesel fuel or F34 / JP8 jet fuel.

The independent suspension system on all the wheels helps to improve the vehicle’s performance. The front suspension is of coil springs and control arms, while the rear suspension is of torsion bars and conventional standard / hydro-pneumatic systems. The PIRANHA 3+ is air transportable by C-130, C-17 and A-400M turboprop military transport aircraft.

The PIRANHA 3+ armoured wheeled vehicle can attain a maximum road speed of 110km/h and a creep speed of less than 3km/h. It can sail in water at speeds up to 10km/h. The range of the vehicle is 750km. The gradient and maximum side slopes are 60% and 30% respectively. The vehicle can ford at a depth of 1.5m and cross trenches of 2m.

The armoured vehicle has a kerb-to-kerb turning circle diameter of 18m, maximum climbing ability of 0.6m and ground clearance of 0.43m. The power-to-weight ratio is 15.3kW/t, while the approach and departure angles are 40° and 36° respectively. The PIRANHA 3+ is capable of operating in temperatures ranging between -46°C and 49°C.