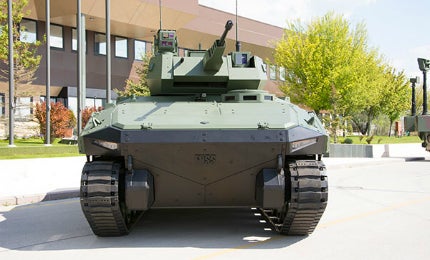 The vehicle is intended to meet tactical and technical needs of the Turkish Armed Forces, as well as other friendly nations and allies.

The Austrian-Spanish Cooperative Development (ASCOD) family of fighting vehicles is marketed by ASCOD AIE with headquarters based in Madrid.

The KAPLAN-20 new-generation armoured fighting vehicle features a water-resistant hull and amphibious characteristics. It is 6.5m-long, 3.15m-wide, has an overall height of 2m and accommodates a crew of three members, including driver, gunner and commander.

Positioned at the front of the vehicle is the driver, while the gunner and commander seats are placed in the middle section.

The personnel carrier variant can carry up to eight troops in the rear compartment, whereas the turreted version can be configured with six seats for dismounts.

A door on the hydraulic ramp located at the rear section enables entry and exit of troops. A wide hatch is provided on the top for use by personnel, while another hatch is provided at the front of the vehicle for maximising the driver’s field of view.

The vehicle incorporates a 24V electrical system and an auxiliary power unit.

The KAPLAN-20 NG AFV’s remote-controlled turret is mounted with a 30mm automatic cannon, while a 7.62mm machine gun is fitted to a coaxial mount as a secondary armament. It can also be armed with 105mm gun systems.

The armoured vehicle’s protection features include automatic fire extinguishing system, blast and leakage-protected fuel cells, advanced modular armour protection, a laser warning system and an active protection system. Its mine blast-protected seats provide increased protection for the occupants in the event of an explosion.

Observation and fire control of the new-generation AFV

Thermal sights and laser-protected glass periscopes are provided to the driver for high-situational awareness. The vehicle is also integrated with a stabilised electric turret drive system.

The KAPLAN-20 NG AFV vehicle is powered by a diesel engine coupled to a fully-automatic transmission system. A heavy-duty torsion bar suspension system improves durability and ride comfort of the vehicle.

The vehicle has a power-to-weight ratio of between 22hp/t and 25hp/t, and is equipped with two fully-armoured fuel tanks at the rear. Its running gear consists of six road wheels on each side.

The vehicle has a maximum road speed of 70km/h and a range exceeding 650km. It can climb obstacles of 0.7m and cross trenches up to 2.6m. Its gradient and side slopes are 60% and 40%, respectively.

The vehicle can traverse through muddy, soft soil and rough terrains, and is capable of operating under hot or cold weather conditions.