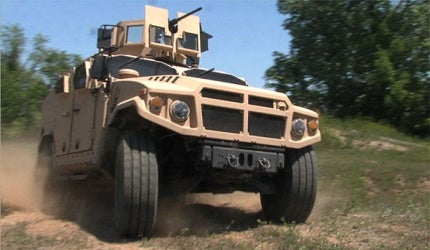 The BRV-O (Blast-Resistant Vehicle – Off Road) is a next-generation light tactical military vehicle developed by AM General for the Joint Light Tactical Vehicle (JLTV) programme of the US Army and Marine Corps. The JLTV programme will replace the ageing fleet of Humvee vehicles with a new family of armoured vehicles offering more survivability and a greater payload capacity.

In January 2012, a request for proposal for the engineering and manufacturing development (EMD) phase of the JLTV programme was issued by the US Army.

In August 2012, AM General was awarded a $64.5m EMD contract to deliver 22 BRV-O prototypes for testing by the US government.

AM General has joined forces with General Tactical Vehicles (GTV) for a separate proposal known as JLTV Eagle. GTV is a joint venture formed in 2007 between AM General and General Dynamics Land Systems. GTV also received a contract for the technology demonstration phase of the JLTV programme.

Other vehicles being offered for the JLTV programme are BAE Systems’ Valanx, Oshkosh’s L-ATV, Lockheed Martin JLTV and Navistar Saratoga.

Design features of AM General BRV-O

"In August 2012, AM General was awarded a $64.5m EMD contract to deliver 22 BRV-O prototypes for testing by the US government."

The BRV-O features a conventional layout design with forward engine, crew cab in the centre and cargo compartment at the rear. The crew cab is equipped with a large two-piece wind screen. It can accommodate a four-man crew. Doors feature either side of the hull, each with a small bullet proof window. The roof is fitted with an armoured turret.

The vehicle provides 49ft3 of storage space which exceeds the JLTV evaluation criteria. It meets the curb and gross vehicle weight limits. BRV-O can carry up to 3,500lb of payload including C4ISR and weapons systems, troops and their equipment without sacrificing performance or mobility. The greater payload capacity also allows the integration of add-on armour kits for improved survivability.

The BRV-O supports infantrymen by offering the protected mobility required to execute their missions and return safely. The C4ISR backbone equipped with open networked architecture enables effective communication between the units in the battlefield.

Major components such as the engine, chassis, anti-lock brake system and auto-levelling suspension are produced by AM General. The company engaged a number of partners to supply crew capsule designs and the C4ISR backbone for the BRV-O.

The trial variant of BRV-O is fitted with an armoured open top glass turret. The turret can be mounted with a 7.62mm or 12.7mm machine gun or automatic grenade launcher. The glass turret provides 360° view for the gunner’s position, while offering all round protection from enemy fire.

The armoured crew capsule protects the crew from small arms fire and mine blasts. It is equipped with energy-absorbing seats. The shaped underbody deflects the blast impact away from the vehicle. The vehicle can be hinged with modular armour solutions for increased protection.

The performance of the armour solutions has already been proved in independent and government-supervised blast testing. BRV-O can accept the future technologies in armour materials to meet the mission requirements.

"The armoured crew capsule protects the crew from small arms fire and mine blasts."

The BRV-O is powered by the fuel-efficient, lightweight Optimizer 3200 diesel engine coupled to a six-speed transmission. The high-torque engine develops a maximum power of 300hp. It offers high performance while delivering low operating and maintenance costs.

The vehicle offers excellent cross-country mobility. It meets or exceeds the requirements of the programme. The self-levelling suspension further enhances the off-road performance of the vehicle.