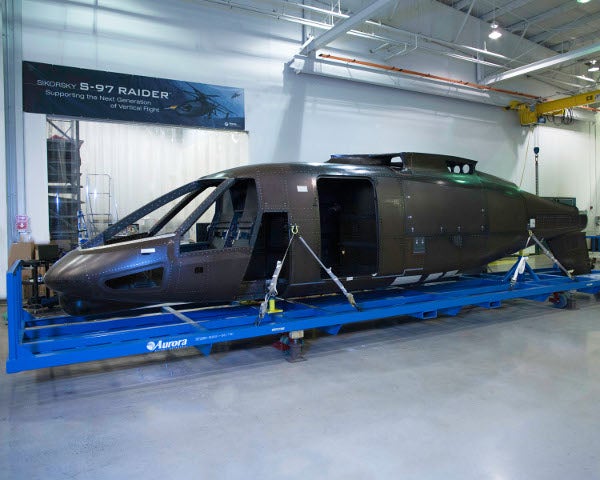 Sikorsky has started final assembly of the prototype S-97 RAIDER helicopter, which is being offered for the US Army's Armed Aerial Scout (AAS) programme.

The move follows the arrival of the fuselage structure comprising an integrated cockpit, cabin and tail cone, at the company's Development Flight Center in West Palm Beach, Florida, US.

Manufactured by Aurora Flight Sciences, the carbon fibre fuselage will be converted into a 36ft-long S-97 RAIDER prototype aircraft designed to outperform legacy military helicopters in speed, manoeuvrability, payload, range and high-altitude operations, according to the company.

Aurora president and chief operating officer Mark Cherry said the fuselage was designed around a set of rigorous requirements.

"We applied our experience developing the composite main rotor pylon for the Sikorsky-built CH-53K heavy lift helicopter, and consequently our understanding of Sikorsky's design and manufacturing methodologies, to influence the RAIDER fuselage's preliminary and detailed designs, and subsequent development of the associated tooling," Cherry added.

"The first fuselage marks a significant milestone for the industry-funded RAIDER helicopter program."

The 11,000lb helicopter is expected to improve on the X2 demonstrator by performing precision manoeuvres in low flight speed, high G turning manoeuvres at over 200kt, hot day hover performance at altitudes up to 10,000ft, and displaying significant payload and flight endurance enhancements compared with legacy light tactical helicopters.

Sikorsky is planning to conduct the first flight of the S-97 helicopter in 2015.

Also pursued by Boeing, Bell Helicopter, AugustWestland and AVX, the AAS programme intends to replace the army's OH-58D Kiowa Warrior fleet, which is unable to meet commanders' demands in terms of speed, range and endurance.