Following on from our comprehensive coverage of the 2012 UK Budget, army-technology.com gauges industry reaction to Chancellor of the Exchequer George Osborne’s efforts to boost R&D and make life more comfortable for acting members of the armed forces.

Catherine Spencer has welcomed the doubling of operational welfare allowance, but highlighted that there is still work to be done.

"There is no doubt that families will welcome these two forms of additional support at a time when they feel most vulnerable. However, with the forecast reduction in operational tours starting next year the number of families benefitting from the allowances will decrease. The freeze in basic pay and increasing charges means the real value of a soldier’s salary continues to diminish," said Spencer.

Spencer also commented that while £100m in additional funding towards housing is welcome, it is still £40m short of what was previously allocated but then withdrawn. It does not answer problems surrounding the rebasing of families from Germany. 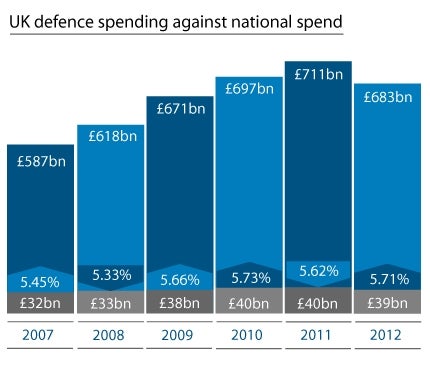 This infographic illustrates the rise and fall of the UK’s national spending in recent years, detailing the total defence expenditure within the budget and the precise percentage of government spending that is attributed to defence costs.

"We welcome any additional investment for our forces but the government are giving with one hand and taking more with the other. The government have made a net cut to forces’ housing of £41m.

"Measures announced today will give little consolation to those facing permanent pension cuts, those on the frontline who have had their allowances slashed and the thousands being made redundant." 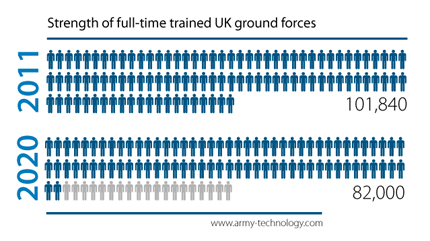 "The ATL R&D credit turns a tax credit into income for the company and makes the benefit more visible to decision makers. This has been lobbied for by UK business and is a really positive move for UK competiveness. The ATC will hopefully result in a migration of R&D expenditure to the UK, with the consequential impact on jobs and wealth creation.

"While the finite detail of the regime is yet to be decided, the proposed minimum rate of 9.1%, which is broadly equal to the existing tax benefit, means the benefit will not be reduced as part of the change, with loss making companies able to receive a payable credit in cash.

"At a time when some countries are looking to reduce the benefit of their R&D incentive regimes, this demonstrates that the UK is firmly open to the R&D intensive companies."

"Leading edge engineering and aerospace technology is exactly what the government should be investing in if UK plc is to remain competitive in the global industry. Creating value-adding engineering schemes that will assist the aerospace and manufacturing sectors in this country is a step in the right direction. It will be interesting to see further details of how this project will develop.

"Aerodynamics is at the heart of all aviation programmes, including military, civil and unmanned vehicles. Maintaining cutting edge capabilities ensures we remain competitive in this global market whatever direction it ultimately takes."

"These things are very welcome but on their own they are only green shoots. In the UK, the government and industry still invest a smaller percentage of our GDP in research and development than our competitors, and while that remains the case we will not fulfil the Chancellor’s goal of making the UK into Europe’s technology centre.

"If we want science to improve our situation we must think bigger than our competitors in investing in the full range of science and innovation from discovery, through development and on to application."

"As co-chair of the AGP, I am absolutely delighted to see the Chancellor’s recognition of the aerospace industry’s contribution to the nation’s economy and the announcement of £60m for the creation of a UK Centre for Aerodynamics. World class aerodynamics capability is key to the industry’s pole position in the European aerospace industry and this investment will keep the UK at the forefront of this technology. Significantly, it will also provide companies with the confidence to further invest in UK aerospace."

Forecast spending for 2012 has been lowered as government officials confirm the UK will pull out of Afghanistan by 2014. Army-technology.com details what the UK Budget 2012 will mean for defence.

The Electronic Warfare Market in the United Kingdom to 2024: Market Brief