Fire power is optionally fitted and can be provided via a remotely controlled weapon station with .50mm gun and grenade launcher. The vehicle has a gross weight of 10t, and can attain a maximum speed of 110kmph and range of 700km.

The 7.5t combat-ready vehicle is optionally mounted with a remote controlled weapon station or a small open roof turret, and is powered by a six-cylinder, four-stroke diesel engine providing a maximum speed of 110kmph and range of 600km.

The vehicle was selected for the UK MoD’s Light Protected Patrol Vehicle (LPPV) programme in 2010 and is called Foxhound by the British Army.

The 7t-class 4×4 Hawkei Light Protected Vehicle (LPV) developed by Thales Australia is capable of carrying up to six troops and offers protection against IEDs, mines and or small arms fire.

Thales Australia developed the Hawkei LPV to fulfil the urgent operational requirements of the Australian Defence Force (ADF) for which it is intended to replace the ADF’s Land Rovers under Land 121 Phase 4 programme. 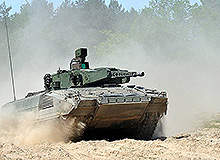 The light multi-purpose vehicle features a weapon mount for a number of weapons systems including mini gun, machine gun, grenade launcher and TOW missile system. The Humvee is suitable for command and control, troop transport, shelter carriage, towed weapons movement, armament carriage, TOW missile platform and for use as ambulance.

The Humvee is currently offered in 15 configurations with common engine, chassis, transmission, and 44 interchangeable parts. The maximum Gross Vehicle Weight (GVW) of the current production models is 10,300lb (4,672kg), while the maximum speed is 113kmph with a maximum cruising range of 402km.

The modular design of the Light Multirole Vehicle (LMV) from Iveco Defence Vehicles allows for the development of multiple variants with varied dimensions, roofs, body configurations and protection levels. The vehicles are fitted with light, medium or heavy protection kits based on the mission requirement, while additional STANAG 4569 Level 3 (ballistic) and Level 2a (mine) protection is also available.

The weapon ring mount or protected cupola can be mounted with remote controlled weapon station armed with weapons up to 12.7mm in calibre. The 7t vehicle is powered by a 190hp engine providing a maximum speed of 110km/h.

The Iveco LMV is one of the preferred light armoured vehicle choices in Europe and is in service with nine armed forces across the world.

The Supacat Protected Vehicle 400 (SPV400) integrates a protected all composite armoured crew pod and V-shaped hull offering high levels of blast and ballistic protection and can be fitted with appliqué armour for additional protection.

The vehicle can be optionally fitted with a remote controlled weapon station, weapon mounts, and smoke grenade launchers. The Cummins 4.5L diesel engine and 176L of fuel capacity provides the SPV400 a top speed of 120kmph and maximum road range of 600km.

The LAMV can be installed with observation, surveillance and communication systems as well as remote weapon station (RWS), roof mounts for weapons and smoke grenade launchers. The vehicle offers all-terrain high mobility and can attain a maximum speed of 105kmph.

The COLT LAV, a 4×4 light armoured vehicle jointly developed by India’s Ashok Leyland Defence Systems (ALDS) and Panhard General Defence of France is based on the combat proven VBL (Véhicule Blindé Léger) light armoured vehicle and offers up to STANAG 4569 Level 2 ballistic protection and STANAG 4569 Level 3 protection against mines and other explosions.

The 7t COLT is currently available in LAV and LTV (Light Tactical Vehicle) versions and has provision for weapon station to mount a variety of gun systems. It is powered by Euro3 compliant inline turbo diesel engine coupled to a six speed automatic gear box, and offers top speed of 105kmph and range of 700km.

The GAZ-2330 Tigr, a high mobility tactical vehicle produced my Military Industrial Company (BMK), a division of GAZ Group, features an armoured steel hull that can withstand 7.62mm rounds and offers up to STANAG 4569 Level 2 protection.

The vehicle can be fitted with a 7.62mm machine gun or 30mm grenade launcher and features a power-pack consisting of 250hp turbo charged diesel engine coupled to five-speed automatic / manual gearbox. It offers a maximum road speed of 125kmph and a cruising range of 900km.

The 6t-class vehicle integrates a radio-controlled explosive device jammer and can accommodate up to nine personnel. It can be deployed in troop transport, convoy escort and protection, search and rescue (SAR), patrol and fire support missions.

The vehicle is fitted with remote controlled weapon station which can mount a .50 calibre machine gun or 7.62mm general purpose machine gun/12.7mm heavy machine gun or 40mm AGL. The LAV can reach a maximum speed of 110kmph and range of 700km and is also offered in a fully amphibious configuration.

The Tiger LPV, a joint product of MDT Armor Corporation and Textron Marine & Land Systems, integrates a box type armoured capsule fitted with a unique flat floor passing across the cabin. The vehicle’s ballistic system with add-on layers provides different levels of armour protection which can be replaced or repaired and upgraded as required.

A remote controlled weapon station mounting a 7.62mm or 12.7mm machine gun can be optionally fitted to the 8t vehicle powered by Cummins 400hp engine. The vehicle has a maximum speed of 100kmph and a range of 610km.