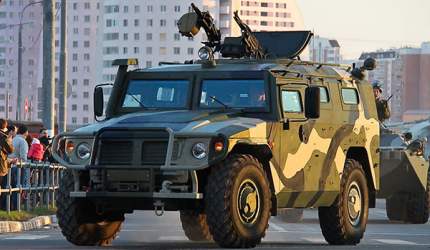 The GAZ-2330 Tigr is a 4×4 multi-role, all-terrain light armoured vehicle manufactured by Military Industrial Company (BMK), a part of GAZ Group. The vehicle is primarily operated by Russian Defence Ministry and Ministry of the Interior forces.

The vehicles are deployed by the rapid-reaction teams and special forces for conducting escort missions, patrols and counter-terrorist operations.

The first Tigr prototype vehicles were unveiled in 2002 and production commenced in 2004. The initial orders were received from the Russian Defence Ministry and the Ministry of Interior. The vehicle is being offered primarily for police and defence customers in Russia.

In October 2012, Russian Ministry of the Interior (MVD) signed an agreement with Nicaragua to supply an unspecified number of Tigr vehicles.

GAZ-2330 Tigr is deployed by the Russian soldiers during the Crimean crisis between Russia and Ukraine in 2014.

“The vehicles are deployed by the rapid-reaction teams and special forces for conducting escort missions, patrols and counter-terrorist operations.”

The Tigr is produced in a wide-range of variants for a number of applications. GAZ-2975 is the military variant of the GAZ-2330 Tigr, and the GAZ-233001 is an unarmoured version developed for the civilian market.

The GAZ Tigr incorporates a conventional layout with engine forward, crew cab in the middle and a troop section at rear. The vehicle resembles the US made HMMWV. The modular design of the Tigr allows the conversion of base vehicle into passenger, armoured and cargo platforms. The vehicle can be configured to meet various mission requirements of the customers.

The vehicle has a length of 5.16m, a width of 2.2m and a height of 2m. It can carry a payload of 1,500kg. The standard version of the Tigr vehicle accommodates a driver and 11 passengers. Other variants are equipped with seating for four to nine occupants.

Armaments and self-protection of GAZ-2330

The standard Tigr vehicle can be armed with a 7.62mm/12.7mm machine gun or 30mm automatic grenade launcher. The armament is mounted on the top of the roof.

The armoured variant of Tigr is equipped with armour plates, spall liners and bulletproof glass windows. The vehicle is available in two protection levels. The armour protects the crew and occupants from small arms fire, artillery shell splinters and improvised explosive devices (IEDs). The armoured variant is 700kg heavier than the standard Tigr vehicle.

“The vehicle can negotiate departure angles of 52°, and can ford a water depth of 1.2m.”

The GAZ Tigr base variant is powered by Cummins B205 20 diesel engine coupled to either GAZ JSC 5-speed mechanical or Allison LCT-1000 automatic transmission. The engine provides a maximum on road speed of 140km/h. A pre-heater ensures the start of the engine during cold weather. The engine compartment is equipped with automatic fire suppression system.

The Tigr is equipped with a full-time all-wheel-drive. The independent torsion-bar crossbar-type suspension consists of hydraulic telescopic shock absorbers and stabilisers. The KI-115AM tyres are fitted with automatic tyre inflation system. The system allows the driver to adjust tyre pressure according to various terrain conditions.

The vehicle has demonstrated excellent cross-country mobility on difficult sand dunes. It has high operating capability in the desert climates with ambient temperatures of up to +50°C. The vehicle can negotiate departure angles of 52°, and can ford a water depth of 1.2m.