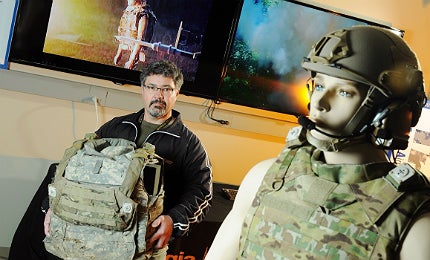 Placed in the line of fire, soldiers are forced to operate in a unique environment where minute changes to stress levels, body temperature and heart rate can become a life or death matter. With soldier survivability taking on new importance, the possibility of monitoring a soldier’s vital signs and taking swift, appropriate action is hugely appealing.

Noting this, the US Office of Naval Research (ONR) launched a proposal for Intelligent Clothing, citing the need for uniform to be capable of identifying soldiers that had been wounded or exposed to radioactive, nuclear or biological materials in the event of an attack. The clothing would require GPS units and transmitters in order to identify the location of a soldier and allow a co-ordinated plan of action to be decided upon at base, using the information gathered.

The proposal further added: "With intelligent clothing, the location of a bullet can be determined with appropriately-embedded sensors within the clothing’s fibers that can estimate the depth of penetration and the effect on surrounding organs. Additionally, if the person was in an environment where a CBRNE weapon had been stored, manufactured or used, the intelligent clothing could identify the agents via specific biomarkers detected within blood, saliva, sweat and urine."

"The possibility of monitoring a soldier’s vital signs and taking swift, appropriate action is hugely appealing."

Following from the ONR’s lead, the Institute for Soldier Nanotechnologies (ISN) at Massachusetts Institute of Technology (MIT) is working towards weaving fibre-topic wires throughout a soldier’s uniform to act as a complete network of multi-use sensors. One such possible use is in the identification of friendly soldiers in action. With standard-issue camouflage easily copied, opposition forces could feasibly hide in plain sight. The idea is that these fibre-optics would hold a signal that could be identified through a laser which, when shined upon the uniform, would transmit a friendly signal to the user’s own uniform, identifying the suspected soldier as friendly. The absence of a return signal would instantly identify opposition.

Another such use of this fibre-optic grid would be its ability measure the shape of a heat pattern surrounding a soldier’s wound, hinting towards the severity of the injury. "Your uniform would transmit that information. You wouldn’t be talking, it would transmit information: who you are, what time you went down, what the wounds are, what is the estimated severity of the wound, et cetera," ISN head John Joannopoulous told Wired‘s Danger Room.

The ultimate goal of the technology is to develop a full-body sensing structure, allowing generals and team leaders to keep abreast of what’s happening to their troops when deployed. The system is, however, still some years away from active deployment. Miniaturisation is required, with current fibres too thick to be woven into a fabric and allow clothing to retain its optimal mobility. Developers hope to reduce the thickness of the fibres from the current 1mm to 100 microns. A method of data transfer also needs to be developed and demonstrated as the current means, which relies on line-of-sight, has only been tested to 75m and can easily be interrupted by obstructions on the battlefield. Improvements and refinements will be sought while the suite remains in testing and development.

In a similar development, India are working towards incorporating a similar suite of sensors within its Futuristic Infantry Soldier As a System (F-INSAS) equipment programme, designed to radically modernise its armed forces by 2020. Although measuring a soldier’s health identifiers seemingly remains a priority, India also hope to develop boots with mine detection sensors fixed to the soles, potentially saving the lives of soldiers tasked with operating in areas rife with mines or IEDs.

New technology has, however, led to the possibility that sensors may not need to be stitched into clothing at all. The US Navy has requested bio-static devices that stick to the skin, seeking the development of sensors capable of monitoring a soldier’s vital signs without the use of needles, gels or electrodes. The request cited the use of advanced materials in order to integrate sensors and transmitters into thumb-sized membranes that can stick to skin, not too similar from temporary tattoos or nicotine patches.

"Miniaturisation is required, with current fibres too thick to be woven into a fabric and allow clothing to retain its optimal mobility."

The technology itself, dubbed Epidermal Electronic Systems, uses micro-manufacturing processes to weave sensors, power supply and transmitters into a single adhesive tab that can be stuck to the skin quickly and pain-free.

Lightweight and free from external wires, the equipment requires negligible energy and can be driven by stray electromagnetic radiation or even through miniscule solar cells implemented in the device.

While resembling temporary tattoos or nicotine patches in size, they are attached to the skin in a far more ingenious way than a simple adhesive, which would soon deteriorate when subjected to the rigorous activity of an in-theatre soldier. The sensor suite sticks to a soldier’s skin using molecular forces, which allow the device to remain attached while being pinched or pulled. In one trial, a sensor tattoo was attached to a subject’s neck for more than 24 hours before it wore off.

"New technology has, however, led to the possibility that sensors may not need to be stitched into clothing at all."

Soldier-worn sensor systems currently in development are not solely designed to collate data for instant use, however. The US Army’s Rapid Equipping Force has challenged Georgia Tech Research Institute (GTRI) to develop a means of measuring the physical environment of an explosion, identifying a soldier’s experience and any possible long-term injuries.

"Because of improved equipment and medical services, people are surviving severe explosions, yet we lack a clear understanding of blast-induced injuries on the human nervous system. Mild traumatic brain injury is a particular concern because it has a wide range of symptoms that doesn’t show up reliably in tests, so we can’t effectively diagnose, treat and manage its long-term effects," GTRI principal research scientist Shean Phelps said.

This is, it is hoped, where GTRI’s Integrated Blast Effect Sensor Suite (IBESS) can play an integral part in not only aiding in diagnosing such injuries, but furthering the US Army’s understanding of them. IBESS, the first system to acquire integrated, time-tagged data during an explosive event, comprises of a unit worn by soldiers which is connected to armour plating between the shoulder blades. A recorder connects to four sensors – two on the soldier’s back and two more that hang from the shoulders – that are designed to capture directionality of the blast.

Data can be collated from a blast and compared to medical records, correlating a blast event to a traumatic brain injury. Although currently capable of capturing environmental data, the system’s open architecture could allow for further diagnostic abilities to be integrated, such as heart rate, blood pressure and EKG activity.

The sheer number of sensor suites and systems currently in development represent a burgeoning understanding that an operational advantage could be secured simply by making a concerted effort to efficiently monitor a soldier’s status. If the soldier of the future is to be equipped with a range of sensors designed to monitor and protect, then survivability could just rise.

Future of the Malaysian Defense Industry - Market Attractiveness, Competitive Landscape and Forecasts to 2023