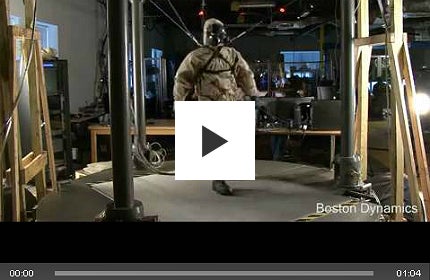 Boston Dynamics frequently hits the headlines with its menagerie of military prototype robots, including the likes of BigDog, Cheetah and SandFlea, which push the boundaries of speed, strength, stability and jumping power. In comparison, PETMAN’s achievements seem mundane – moving just like an ordinary soldier, but for hours on end – endurance-testing soldier-worn garb in a way in which no previous mechanically-operated suit testers have been able to.

While previous prototypes of PETMAN – or Protection Ensemble Test Mannequin – were spookily headless, the current version has been provided with somewhere to park its helmet. Built for stamina rather than agility, PETMAN is tethered to supply continual power, but that doesn’t stop it displaying a full range of movements. Windmilling its arms and stepping side-to-side with its arms aloft, at some points it seems to be doing a dance that would make David Brent from The Office proud.

But there is a serious purpose behind the repetitive, if occasionally comedic, actions. The US Army is using it to test the next generation of hazardous materials (hazmat) suits and other protective gear that shields soldiers from the effects of chemical or biological weapons.

“PETMAN is tethered to supply continual power, but that doesn’t stop it displaying a full range of movements.”

For the latest validation tests, PETMAN is dressed in a chemical protection suit and mark, and set in motion. Sensors embedded in its skin detect whether any chemicals penetrate, even at the extremes of its range of motion, and for added reality PETMAN’s skin maintains a human-like microclimate of humidity and temperature, while it even oozes moisture to simulate sweat.

PETMAN was funded by the US DoD Chemical & Biological Defense CBD programme, and Boston Dynamics partnered with MRIGlobal, Measurement Technology Northwest, Smith Carter, SRD, CUH2A and HHI for its development.

Unlike some of Boston Dynamics’ other robots, PETMAN won’t potentially create an imposing presence on some future battlefield, but it will ensure human combatants stay significantly safer.

Given what’s at stake, should soldiers be pumped full of drugs to help them reach their peak, and to what extent is this already happening?

Boston Dynamics has released a new video of its BigDog all-terrain pack-carrying robot picking up 35lb breeze blocks and throwing them as far as 17ft away.