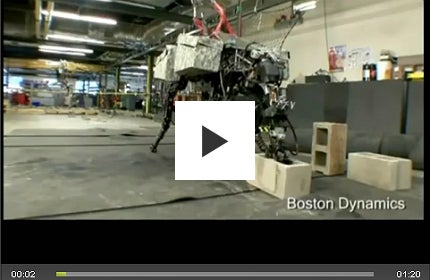 Boston Dynamics has released a new video of its BigDog all-terrain pack-carrying robot picking up 35lb breeze blocks and throwing them as far as 17ft away.

“Boston Dynamics aims to create a robot that can go anywhere humans can go.”

Anyone who follows military robotics, especially those models which travel on legs, will appreciate the difficulty in achieving this latest milestone. The whirring of servers and drunken staggering of robotic feet, as BigDog successfully remains upright while putting its weight behind each toss, underlines the millions of calculations being carried out every second to achieve this feat, much the same as those that take place in the mammalian brain.

The goal of the most recent brick-lobbing exercise, sponsored by the US Army Research Laboratory’s Robotics Collaborative Technology Alliance (RCTA) programme, is to demonstrate using the strength of the legs and torso to help power motions of the arm. This whole-body motion is the same applied by athletes taking part in events such as the shot-put, javelin or hammer.

Through its BigDog programme, Boston Dynamics aims to create a robot that can go anywhere humans can go, to inform future military robot programmes so robots can follow foot patrols while carrying their supplies. The arm is a new addition, which could help soldiers pick up heavy loads or could clear it for a dismounted patrol to pass. It could also be used for a number of humanitarian applications, including search-and-rescue missions.

Able to carry a load of up to 340lb over rough terrain, BigDog stays upright and adjusts its gait to the topography using an array of 50 sensors which measure the attitude and acceleration of the body, and the motion and force of joint actuators.

“Imagine the shock and awe that would result if this three-foot long, 240lbs monster rounded a hill throwing cinderblocks.”

This sophisticated feedback loop, combined with multijointed legs, means it can stand up, crouch down, crawl and gallop at speeds of more than 7mph – in other words, wherever human combatants can go, it can follow.

Boston Dynamics is also behind a number of other groundbreaking prototype military robots, including PetMan, with its spookily human-like gait, and the super-speedy Cheetah, which can reach speeds of more than 28mph. None of these are likely to make it to the battlefield in anything like their current format, but the technological innovations behind some of their functionality is even now inspiring military machinery.

However, while international guidelines heavily restrict using armed battlefield robots in conflict, BigDog could have an entirely different role than just carrying kit. Can you imagine the shock and awe that would result if this three-foot long, 240lbs monster rounded a hill throwing cinderblocks at the enemy? It’s a good bet Boston Dynamics’ robot technicians can, and often do.