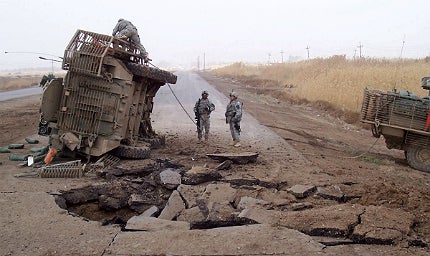 In spite of the various technological advances aimed at detecting and neutralising improvised explosive devices (IEDs), they continue to be the sharpest of thorns in the side of alliance forces operating in Iraq and Afghanistan. An overwhelming percentage – 66% – of coalition casualties in Afghanistan have been caused by IEDs, and figures alluding to a sharp decrease in the number of deaths owing to IEDs mask an overall increase in the number of discovered devices, which rose by five percent between 1 June 2011 and 31 May 2012.

This increase, blamed upon the availability of component parts from Pakistan, highlights the importance of a clear and concise strategy to combat such threats. While cutting-edge technology can certainly contribute towards such a capability, it is largely undervalued without the right training.

Optima managing director Keith Hammond, whose company has recently won an excellence award for its work in providing C-IED training for British forces, believes that: “You have to have the right equipment, especially for the high-end specialists, and you have to have the right training. If you can combine those, along with the right procedures, then you have a capability. This is what some organisations fail to recognise, they think that once they have a piece of equipment they have a capability, but they have to know how to use it properly.”

Not as simple as PowerPoint

“An overwhelming percentage – 66% – of coalition casualties in Afghanistan have been caused by IEDs.”

OPTIMA specialises in developing counter-IED and search capabilities and has spent the last three years permanently contracted by the UK Ministry of Defence to develop new capabilities for UK forces operating in Afghanistan. Having also worked with the European Defence Agency and the International Committee of the Red Cross, the company’s recent award at the 2013 Counter Terror Expo recognised the efficacy of its training programme, with 99% of soldiers deemed competent at the programme’s conclusion.

Just how does a private company go about bestowing soldiers with such life-saving knowledge? “There’s a certain methodology that we use when designing the course. It’s not as simple as putting a couple of instructors in a room and producing lesson plans and PowerPoint presentations,” explains Hammond. OPTIMA worked alongside the MoD’s EOD & Search training school, the equipment delivery team and the manufacturer of the system to produce a two-part training course, held both in the UK and at Camp Bastion, in Afghanistan.

Designing and delivering the course in seven weeks, coupled with the logistical challenge of deploying MoD-validated instructors and building the requisite training facilities in Afghanistan, posed their own unique problems. However, the main consideration for OPTIMA was ensuring that soldiers finished the course both competent and confident in using the equipment.

“The fundamental consideration in designing the course was ‘What is the threat?’ because only by clearly understanding what the threat is could we define what is required to counter that threat,” states Hammond.

Is outsourcing a thing of the future?

Perhaps the most intriguing concept is not that such training is being undertaken, but that a private company is being entrusted with contributing towards the delivery of such an important capability. This outsourcing, which bears something of a similarity to the MoD’s continued preference of commercial off the shelf (COTS) technology over expensive bespoke equipment, could be a hallmark of a post-Strategic Defence and Security Review military, shaped by budgetary constraints.

“While cutting-edge technology can certainly contribute towards such a capability, it is largely undervalued without the right training.”

“There is a general theme across government to look at the private sector and private companies that are competent enough to deliver training, and I can see how those companies could potentially fill gaps that might appear in the future,” says Hammond, adding: “If done properly, outsourcing the development of capabilities to the private sector can reduce the overall risk, but it’s more that inevitably, technology takes time, money and people to develop, and the MOD doesn’t have significant amounts of each that it can focus on research and development projects.”

In this respect, the UK is following the US Army’s lead. The US is very comfortable with outsourcing a considerable amount of its training, even going as far as encompassing training required by specialist forces, due to what Hammond refers to as a “narrowing culture difference” between the two countries.

“I think the private defence companies in the US are very much looked upon as still serving, almost just an extension of their military service, whereas that culture doesn’t exist in the UK, although it is starting to. I think the UK has seen the successes and where it works in the US, and they are keen to replicate this, but at the same time are understandably cautious about how to progress down that line. ”

“Arguably the most dangerous element of the IED threat is its constant, evolutionary nature.”

With the outsourcing of training proving to be a popular concept and technological advancements in the field of detection and protection making it increasingly difficult for insurgents to target coalition forces, what does the future hold for C-IED capabilities?

“The unfortunate reality is that IEDs will remain the insurgent’s weapon of choice for many years to come, to use an over used cliché,” explains Hammond. “It’s a low-technology, low-cost threat that has strategic impact at the highest level, and that’s been proven time and again in Afghanistan and Iraq and elsewhere.”

Arguably the most dangerous element of the IED threat is its constant, evolutionary nature. Whereas coalition forces may take weeks or months to develop the doctrine and training to defeat a new threat, insurgents can adapt IEDs almost overnight. The key, as Hammond is quick to state, is not so much countering what’s in the ground, but anticipating what insurgents are going to do next.

“The biggest challenge by far will be the ability of the military and the police to anticipate what the next threat is going to be, and to have the capabilities already developed that can deal with that threat when it arises or matures.”

“It is a constant game of cat and mouse, of threat and counter-threat, new threat and new counter-threat. The danger will be when we get to a position by – and we’re not far from it – we’re in a position to counter every threat that the insurgent puts in the ground, what’s the next thing they’re going to do? That’s the concern.”