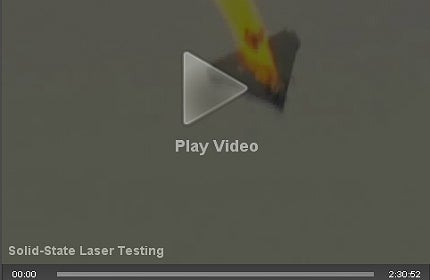 The US Department of Defense has revealed that its Laser Weapons System (LAWS) has successfully demonstrated its ability to down small aircraft during testing, and will be installed upon a US Navy vessel in order to undergo further testing.

The laser weapon shot down a drone during testing by igniting it, sending it crashing down to earth just moments after engaging it. Having experienced success in the trial, LAWS will be installed upon the USS Ponce, an amphibious transport docking ship of the Fifth Fleet, during the next year, prior to an operational deployment in the summer of 2014.

The Fifth Fleet is currently active in and around the Persian Gulf and waters off the Horn of Africa, including areas rife with piracy and waters controlled by Iran, which possesses a fleet of fast-moving vessels highlighted as posing a particular danger to the US Navy’s larger vessels.

"The laser weapon shot down a drone during testing by igniting it, sending it crashing down to earth just moments after engaging it."

Despite the relatively premature nature of the solid-state laser’s success, the weapon has already been heralded as the "future" by Office of Naval Research Solid-State Laser Technology Maturation Programme officer Peter Morrison.

Despite the large cost of production – the prototype is said to have cost between $31-$32m to produce – LAWS is hugely inexpensive to operate. At regular rates, the cost of each shot in terms of energy consumption is approximately $1. Should LAWS produce a high rate of accuracy and efficacy, it could soon replace the Gatling gun, with rounds of that particular weapon costing several thousand dollars.

Another popular trait of LAWS is its ability to target objects moving at high speeds, which are currently problematic to engage. With vessels in that region, including pirate skiffs and the Iranian Navy’s fleet of vessels based upon Bladerunner speedboats, easily outrunning US vessels, the ability to efficiently engage such fast-moving targets would be welcomed. LAWS should be capable of achieving that, with the system able to engage missiles in the future.

From fantasy to reality: how long until fully fledged laser deployment?

Those expectant of a defence force armed to the hilt with science-fiction-like laser weaponry may have some time to wait yet, however. Full capability is not expected for LAWS for another decade, and some major doubts surrounding the system’s efficacy still persist.

"At regular rates, the cost of each shot in terms of energy consumption is approximately $1."

The system is yet to be tested in certain weather conditions, including heavy rain and fog, two such conditions highlighted as being potentially problematic due to their obscuring of sight.

If the beam is disrupted by such weather conditions, some people have doubted the weapon’s efficiency. A Congressional Research Service report issued on 14 March 2013 praised laser technology, but addressed these doubts by stating: "Lasers might not work well, or at all, in rain or fog, preventing lasers from being an all-weather solution."

Concerns have also been raised regarding what would happen in the event of a missed shot, and whether or not civilian aircraft or satellites could be downed by a rogue beam. With a further decade until full operational capability is expected, the US Dod still has time to iron out any kinks of what is already being dubbed as the future of warfare. Both allies and opposition will more than likely be watching future developments with a keen interest.