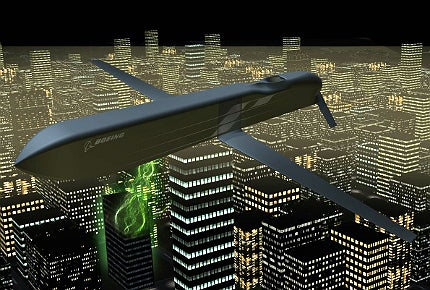 The rampant modernisation of armed forces across the globe has, unfortunately, also served to advance the technological capabilities of terrorists.

"As the black market equips terrorist organisations with advanced means of destruction, the world’s armies have had to respond."

As the black market equips terrorist organisations with increasingly advanced means of destruction, the world’s armies have had to respond in kind.

While advances have obviously been made in the means of killing machines, armed forces have also seen the development of new and emerging methods of prevention, most notably in the manner of electromagnetic pulse (EMP) weapons.

Once a cornerstone of futuristic science-fiction, the EMP proposes the ability knock out enemy systems over a large scale, without causing widespread destruction and the cost of civilian lives.

Although EMPs have been in various stages of production and testing for many years, the technology has now been refined to such an extent that targeted weaponry has now come to the fore. Promising to knock out enemy technology while saving that of nearby hospitals or friendly troops, the ability to direct EMPs, as demonstrated by devices like Boeing’s CHAMP, holds the potential to revolutionise modern warfare.

"The EMP proposes the ability knock out enemy systems over a large scale, without causing widespread destruction."

While the involved technology may not be, the premise of the missile is relatively simple; to remotely disable enemy systems with minimal collateral damage. Devices such as electromagnetic pulse bombs threaten to affect a large area and remain indiscriminate in doing so, putting at risk hospitals and other buildings that offer crucial services to innocent civilians. The CHAMP works by directing a precise beam of high-energy microwaves at the target building, disabling the electronics inside within seconds.

Boeing reported the results of the successful test, in which the missile was fired before disabling computers in target buildings. The missile flew for an hour and targeted seven buildings, disrupting computers while limiting collateral damage. Upon completion, the missile was flown to an undisclosed location before returning to Earth.

A video released by Boeing to accompany the news of the successful test indicates the CHAMP’s potential use inside bustling cities with targets surrounded by costly collateral. With the US coming under increasing criticism regarding the impact of pre-emptive strikes on innocent civilians, CHAMP could represent a marked change of strategy, with Boeing Phantom Works’ CHAMP programme manager Keith Coleman stating its potential to "mark a new era in modern warfare".

"In the near future, this technology may be used to render an enemy’s electronic and data systems useless even before the first troops or aircraft arrive," added Coleman.

On a much smaller scale, but bearing a similar ethos, comes NetLine Communications Technologies’ Portable Jammer Packs. The Israel-based company has produced one of the smallest jammers ever made, roughly the size of a hand-thrown grenade, responding to a request for a portable jammer that could be used by elite units and Special Forces when carrying out an operation in urban spaces.

"The CHAMP works by directing a precise beam of high-energy microwaves at the target building, disabling the electronics inside."

Weighing approximately 2.5lbs, the device can be thrown into an area or building to suppress IEDs and block specific channels before an intrusion, handing a battlefield advantage to its operator. Such an advantage is currently unmet, as contemporary devices are either too large to be manoeuvred into tight spaces, or are indiscriminate in the electronics they disrupt.

Electronic fratricide, or radar jamming friendly fire, has been recorded as a major problem in Afghanistan, with radar jammers used to prevent the remote detonation of bombs disrupting communication disrupting operations at the nation’s main air base.

The device is initiated by the operator pulling a safety catch, much the same as a hand grenade, before being thrown into the desired area. When deployed, the device uses electrons to disrupt nearby communications devices using channels, with the device capable of being pre-programmed to block any specific channels.

These can include remote IED triggers like rigged cellular phones, a common ploy used in urban warzones such as Iraq and Afghanistan. After use, the device can simply be picked up, recharged and reprogrammed for use in other combat missions.

Miniaturised, but just as effective

The developers did, however, have to work around some critical issues in order to ensure the device remained combat-able. In order to keep the device small enough to be hand-held, existing jamming modules have been miniaturised and antennas printed upon circuit boards inside the grenade.

The system was also cushioned with rubber in order to stop the impact dislodging any important circuitry, and heat-absorbing elements were added to the internal battery compartment to prevent overheating during extended use. 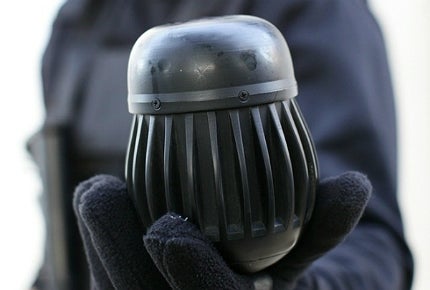 The Israel-based company has produced one of the smallest jammers ever made. Image courtesy of Netline.

Both Boeing’s CHAMP and Netline’s JMPs are, perhaps regrettably for soldiers currently in action, still in the developmental stage, but represent a change in the attitude of research and development engineers.

The ‘kill at all cost’ attitude that led to the development of indiscriminate ammunitions such as the cluster bomb has gone, replaced with a need to hone the targeting capabilities to reduce collateral damage. With weaponry like CHAMP and JMPs in the development pipeline, the risk of conducting missions in the direct vicinity of civilians could be about to fall.

As the exchange of hostilities between Israel and Gaza escalates, questions are being raised about the effectiveness of Israel’s Iron Dome air defence system.

Controlling multiple soldier-mounted electronics systems could be as easy as strumming chords on a guitar-playing game.