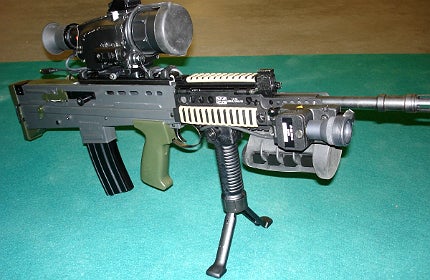 The main purpose of infantry soldiers is to engage the enemy, and increasing numbers of high-tech electronic systems are enabling them to better carry out their missions. But if they have to move their eyes from their weapon sights or their hands from their weapons, they are unable to perform their primary duty with an effective response time and could put themselves at risk.

Year-on-year improvements in size, weight and power mean more advanced systems can be carried by combatants, yet despite the efforts of international soldier modernisation programmes, effective integration remains firmly on the drawing board.

Far from being the military equivalent of Robocop, soldiers call this the ‘Christmas tree effect’, as more of these separate electronic baubles are dangled from their uniforms, backpacks and weapons.

"The patented technology was originally developed for the Royal Australian Navy’s divers to control a command system."

Australian company Kord Defence believes it has come up with a solution. Its SmartGrip Rifle Input Control (RIC) uses chordic input – a combination of key presses by the fingers of one hand – to carry out pre-defined actions on different pieces of equipment.

"A commander could be looking through a sight to target the enemy. He could press forwards on the control to talk to his soldiers, and press another chord to talk to his commander and tell him what’s going on. While all this is going on, he could press another chord to use his laser pointer to help describe to his soldiers what’s going on."

Finklaire likens the problem facing soldiers with the many remote controls we keep on our coffee tables. "The only controls you really need to use are volume up, volume down and change channels, and yet there’s no big red button that says ‘News’ if that’s what you want to see."

"This is what’s happened to the soldier; he hasn’t got the button that he needs. Not only does he have to operate multiple devices on the weapon, he has to take his hands off his rifle to operate his personal radio. Most rules of engagement say you can only fire your rifle when you’ve got your hands on it."

Kord Defence carried out experiments in which they filmed reservists out on manoeuvre which showed their hands moving off the weapon to press a button on various pieces of equipment. The SmartGrip RIC provides a central control that operates not just the electronics on the weapon, but on the body as well.

Soldiers learn to use the SmartGrip in training through small on-screen symbols that show which buttons to press, but after a short time the key combinations become second nature through muscle memory, like learning to use any other piece of equipment, or indeed playing the Guitar Hero video game.

As it is a digital system with no moving cursor or pointer, is it unaffected by vibration or movement. The patented technology was originally developed for the Royal Australian Navy’s divers to control a command system.

"The SmartGrip RIC provides a central control that operates not just the electronics on the weapon, but on the body as well."

Finklaire believes it is not just the technology but the philosophy behind it that could be the key to SmartGrip filling soldiers’ needs where previous integration efforts have failed.

"We haven’t concentrated only on the weapon, we concentrated on the system," he says. "Equipment manufacturers recognise there’s a problem with control, so they often put what I would describe as a ‘rat’s tail’ – a remote pressure switch attached to the end of the device – that you can put on the weapon somewhere."

SmaftGrip devices will fit on to any rifle that has the standard Nato and Picatinny rails specifically designed to attach kit and connects via cabling to all the devices on the body.

"As long as we have the interface control document and there’s an in / out port on the electronic device, it is not difficult to programme it so we can control it, as we’ve done for a number of armies already," says Finklaire.

It is linked to body-worn equipment such as personal radios either by radio frequency or tethered via a cable run through the rifle sling. "A commander would be carrying his personal radio to talk to his soldiers, and a secure combat net radio to talk to his commanders on his body; he’s controlling maybe a flashlight, a laser pointer, and a weapons sight. In excess of ten buttons in separate locations could be replaced by a single device," claims Finklaire.

"Soldiers learn to use the SmartGrip in training through small on-screen symbols that show which buttons to press."

The rifle control weighs 185 grams with around an extra 100 grams of cabling – slightly less for the British Army SA-80 than the American M4, which requires longer cables. Size-wise it fits in the palm of the hand and Kord Defence has carried out R&D to ensure it is moulded into a comfortable grip.

The SmartGrip RIC is currently at Technology Readiness Level 7 (TRL7), meaning a prototype near or at planned operational system, and Kord Defence has devices available for trial. The company won the US Foreign Comparative Testing Office programme last year for the US to trial it and tendered it for the UK MoD Small Arms Systems Integration Study (SASIS).

Finklaire also predicts markets outside the military. "I watched the riots in England on the news last year," he says. "If you look at those policemen, in one hand they’re carrying a clear polycarbonate shield, and in the other hand they had a baton.

"They had to keep their eyes on the rioting crowd; if they looked down an electronic device, the crowd would get the better of them. And yet they still had to operate radios and helmet or shoulder-mounted cameras to record evidence. The technology that we developed in Kord Defence can be used in any of these situations where people are in distress and they need to control many electronic devices."

Meanwhile Kord Defence continues to further develop the technology. The SmartGrip already operates for 12 months off one DR123 battery, and the company plans to do more work on the power side, reduce the size and investigate embedding it in other devices.

If Kord Defence’s concept of multiple electronics systems controlled through a single one-hand controller comes to fruition, the defence industry’s vision of truly integrated soldier systems may well take a step towards becoming a reality.

"You’re able to use the functions of all the electronic devices that are on the weapon and the body in this so-called soldier system at the same time," says Finklaire. "I think that’s quite a unique capability that will speed up [each] soldier’s ability to operate and hopefully make them safer.

Technological advancements have thrust smartphones from the hands of teenagers to the heart of the battlefield. Liam Stoker investigates the latest development in the pursuit of secure smartphones, including the re-emergence of the Nett Warrior programme.