The debate regarding the use of smartphones on the battlefield has raged practically since their development. With various companies vying for lucrative contracts, individual strengths and weaknesses have been meticulously examined.

Whereas fears surrounding Apple‘s security protocols have been allayed, the company’s refusal to allow modifications to source code has seen its popularity within military ranks dwindle.

This has thrust Android and RIM, the company behind the commercially successful BlackBerry, to the forefront of the field. Android-powered smartphones have now progressed into military testing, with army officials thought to favour the Android system as a result of its open architecture.

The US Army recently completed a series of field trials conducted at White Sands Missile Range, where soldiers were given General Dynamics-made Motorola GD300 and Motorola ATRIX smartphones to use, powered by Android. The devices were used during the trials to locate other soldiers, discover easier paths and communicate via text message. Combat leaders were given tablet computers, which displayed soldier locations on a map.

The devices were not, however, strictly off the shelf. They came installed with software named Nett Warrior, a programme that was thought to have been shelved owing to spiralling costs and requirements. The army originally envisioned Nett Warrior to outfit dismounted soldiers with wearable computers, although this has subsequently been scaled down to incorporate just smartphones.

Whereas blue force tracking traces coalition troops on the battlefield, TIGR allows soldiers to report what they see on the battlefield, whether it be enemy positions or weapons caches, to a collective database that can be accessed by other squads; an invaluable intelligence source for soldiers in the field.

Soldiers have since tested smartphones at three separate network integration evaluations (NIEs), with the third such test costing approximately $60m. The 2nd Brigade, 1st Armored Division of the US Army is scheduled to deploy to Afghanistan in late 2013, and tested the devices during May 2012 to put them through their paces in an environment not too dissimilar to Afghanistan.

The desert, mountains, heat and sandstorms experienced at the White Sands Missile Range bears a striking resemblance to the conditions experienced by soldiers on active duty in both Afghanistan and Iraq.

Locating friendlies on a screen 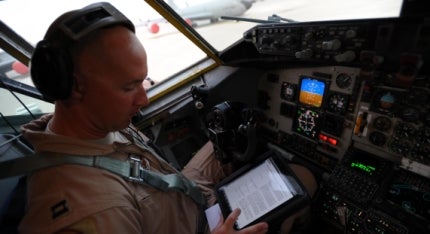 A US Air Force pilot refers to a computer tablet during checks aboard a KC-135 Stratotanker aircraft. US Air Force photo by master sergeant William Greer.

Speaking to Fox News, US Army brigade commander colonel Daniel Pinnell claimed that such devices will enable him to lead a stronger defence team. "Before this point I had to grab a hand mic and ask 30 people to describe to me as best they can on what piece of dirt they’re on and what condition they’re in," Pinnell added, highlighting the use of the system’s soldier locator.

"Devices were used during the trials to locate other soldiers, discover easier paths and communicate via text message."

The development of the system has also seen numerous changes on the basis of recommendations from soldiers having used the devices during previous NIEs. US Army specialist Aaron Boatwright told Dod Buzz about one particular change, with smartphones now attached to the chests of soldiers instead of a previous prototype that was connected to the wrists, with wires running down a soldier’s arm. "Those wires were terrible. This is much more comfortable," added Boatwright.

While soldier comfort and added capabilities are obviously high on the agenda, arguably the most important strength of any military-use smartphone is a secured network. If any device is to log and display the locations of an entire combat squad, the network that carries that data needs to be as protected as possible.

The security measures of smartphone networks are not only a concern for those in combat situations, but also for officials at the US Department of Defense who often communicate potentially sensitive information. 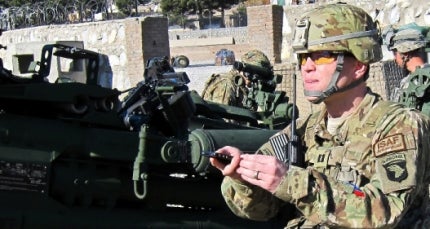 A soldier using a navigational application on a smartphone. US Army photo by Sgt. 1st Class Paul Shoemaker.

In response to the increasing need for secure smartphones, the US Department of Defense issued its Mobile Device Strategy report in May 2012, outlining its guidance for DoD forces that "have been and continue to be increasingly mobile."

"Smartphones undoubtedly possess the potential to provide huge advantages to both soldiers on the battlefield and officials in the Department of Defence."

The report itself highlights the DoD vision to improve mobile technology, focusing on improving wireless infrastructure to support secure access and sharing of information via voice, video or data by smartphones, as well as providing the processes and tools to enable the development, testing and distribution of DoD-approved mobile applications.

The DoD highlighted several areas in particular where it could further the development of secure smartphones, including the need to leverage industry infrastructure, emerging technology and commercial-off-the-shelf products in accordance with policy and standards. The DoD will also participate in wireless networking standards-related bodies, such as the TeleManagement Forum, in order to support developments.

The DoD is, however, acutely aware of the potential dangers surrounding the increasing use of smartphone platforms to transfer data. Referring to the "expanding boundary of threat", the report indicates that the use of smartphones makes them targets not just for traditional security risks, such as viruses, worms and Trojans, but also for new and sophisticated forms of attack, such as third-party accessing of data through Bluetooth connectivity.

In response, the DoD has emphasised the need to develop a new wireless security architecture that successfully mitigates the exploitation of mobile devices while leveraging both new and emerging technical capabilities.

To ensure that smartphone apps developed for use by the DoD conform to standards and protocol as well as interoperability across differing operating systems, the department has highlighted the need to establish a development framework that leverages commercial capabilities and ensures compliance with security requirements.

An app certification process will also be introduced, ensuring that malware and viruses are not embedding into the app and prohibiting the transfer of user and DoD data to non-DoD servers and devices, an occurrence which could potentially trigger a leak of data.

Having outlined a number of crucial steps and considerations, the DoD will now outline an implementation plan to ensure the efficacy of the strategy. The department has also pledged to explore emerging technologies as and when they become available to "maintain the notion that tomorrow’s information enterprise may look very different from today’s".

Smartphones undoubtedly possess the potential to provide huge advantages to both soldiers on the battlefield and officials in the Department of Defence.

As security concerns are gradually allayed and technology refined through testing, smartphones are edging ever closer towards seeing action.