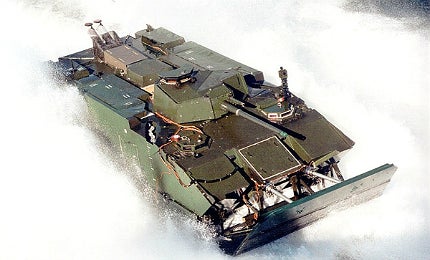 Against the background of fast evolving technologies, changing military needs and dwindling defence budgets, conventional approaches to design and manufacturing have increasingly proven overly slow and expensive – and that has led to a radical re-think of the whole acquisition process.

The US Defense Advanced Research Projects Agency (DARPA) is leading the charge, with its Fast Adaptable Next-Generation Ground Vehicle (FANG) programme, which aims to harness the benefits of open-source design to deliver a cutting-edge, amphibious infantry fighting vehicle (IFV) in a fraction of the time needed by traditional routes.

It is a big issue. Nearly two decades of development went into the US Marines’ Expeditionary Fighting Vehicle (EFV) project, during which time the nature of the missions it would be tasked to undertake and the threats it would face, had evolved significantly.

In the end, however, it was not the shifting demands of the battlefield that finally killed it off in 2011, but its ballooning projected costs; this time DARPA will be looking to crowd-sourcing to help keep the costs down too.

“Conventional approaches to design and manufacturing have increasingly proven overly slow and expensive.”

Providing the Marines with what has been dubbed their ‘swimming tank’ by throwing the design challenge out to the world at large might seem an ambitious notion – if not an outright gamble – but as DARPA are quick to point out, this is not crowd-sourcing in the traditional sense of the word.

The future combat effectiveness of the Corps is clearly not about to be entrusted to a group of randomly self-selected unknowns, and while the competition is open to any US citizen, the focus will inevitably really fall on those with the necessary technical ability and aptitude.

DARPA is already working to implement “novel mechanisms for credentialing users and for ensuring the integrity of the final design” while ensuring that the number of contributors in the design process can be expanded as widely as possible – an exercise they term “democratizing innovation.”

The key to achieving compressed timelines and reduced costs lies in changing the way vehicle designs are engineered, and instead of tasking specialist teams with creating individual systems in isolation, encourage an integrated and collaborative approach.

“The future combat effectiveness of the Corps is clearly not about to be entrusted to a group of randomly self-selected unknowns.”

This should help circumvent problems that typically occur when separately designed parts are united and “all those components and sub-systems interact in ways we couldn’t anticipate,” as Lt. Col Nathan Wiedenman, DARPA’s Tactical Technology Office programme manager, put it at the FANG press conference in October.

Identifying, locating and then eradicating those unexpected interactions between the constituent systems of the whole complex assembly can often condemn the project to a protracted design-build-test-redesign loop – a lengthy stop-start process that quickly eats into time and budget.

DARPA’s crowd-sourcing approach, by contrast, starts with an online library of data detailing the requirements of each of the vehicle’s systems, and invites design teams to devise the individual components with the full knowledge of how they will ultimately have to combine.

Forming one of the four linked initiatives of DARPA’s Adaptive Vehicle Make (AVM) programme, FANG specifically sets out to involve individuals and companies from outside of the traditional defence industry, with the relevant skills and expertise to contribute innovative ideas to the project. It will involve a series of FANG challenges – three independent design competitions to be judged against the specifications of the Marine’s EFV replacement – the new Amphibious Combat Vehicle (ACV).

With a $1m prize up for grabs, the first of these – designing the IFV’s mobility and drive-train – is due to begin in January, to be followed later in 2013 by another $1m contest to devise the chassis and structural subsystems.

The third and final challenge, scheduled for 2014 and this time worth $2m to the winning team, will be for a full vehicle design – which, if everything goes to plan, could end up undergoing operational testing alongside other, conventionally-designed, ACV prototypes.

“The key to achieving compressed timelines and reduced costs lies in changing the way vehicle designs are engineered.”

A great deal of work has gone into providing the right design infrastructure to support the project. The FANG challenges will take place within a collaborative virtual environment – VehicleFORGE – where competing teams will be able to use the AVM portfolio’s META design and verification software, and access the online component database, known as the Component, Context, and Manufacturing Model Library (C2M2L) and pronounced “camel.”

The idea behind VehicleFORGE is to throw the window open wide for design innovation, and produce a design that is what DARPA describe as ‘correct-by-construction’ – avoiding the usual system interaction problems that beset normal approaches, driving up costs and slowing down progress.

By allowing the design teams that form to view the requirements for each component, use the specially-developed imaging software to design their systems and then see at once how it will interact with the rest of the vehicle, the thinking goes, specifications can be adjusted as required.

Once all of those issues have been resolved, and the winning design finally chosen, it will take physical shape in a “foundry-style” manufacturing facility – Instant Foundry Adaptive through Bits (iFAB) – using a programmable and swiftly configurable approach to construction.

Open innovation itself is nothing new – nor is it a particularly novel departure for DARPA. The agency hosted ‘Grand Challenge’ autonomous vehicle competitions in 2004, 2005 and 2007, and last year’s Experimental Crowd-derived Combat-support Vehicle (XC2V) Design Challenge was an early experiment in FANG-style crowd-sourcing.

The brief there was to come up with a vehicle body design for two different missions – combat reconnaissance and re-supply / medical evacuation. The winning design, FLYPMode, was designed to provide 360° visibility and high levels of protection, using a modular design around a common chassis which can be configured on-the-spot to meet mission demands, and has sufficient space for six personnel.

However, ground-breaking though the design itself is, arguably the biggest outcome of the initiative was that it demonstrated just how quickly crowd-sourcing can go from concept to functioning prototype – in this case, well within the 14 weeks allocated. With each of the first two FANG competitions scheduled for three-months duration, and the final stage for six, DARPA are obviously hoping that the same kind of time-saving will be in evidence again – openly talking about speeding up the development timetable by a factor of five.

If crowd-sourcing really can deliver anything approaching that when it comes to designing something as complex as a ‘swimming tank’, after the previous investment of ten years – and more than $3bn to date – on the ultimately abortive EFV, the appeal is obvious.

Boston Dynamics has released new footage of its BigDog robot demonstrating unprecedented coordination, strength and balance as it throws breeze blocks across a room.