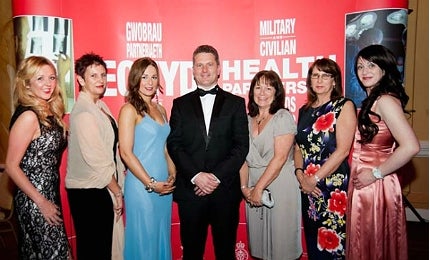 Buddy is being rolled out to support more than 500 returning veterans following a successful trial of the service by the Military Veterans’ Improving Access to Psychological Therapies (IAPT) service in the north-west of England.

Supported by SMS messaging, Buddy enables therapists to keep in constant contact with their clients.

Berenice Baker: What’s the background to the Buddy programme?

"Supported by SMS messaging, Buddy enables therapists to keep in constant contact with their clients."

Dr Alan Barrett: In the north-west we have an estimated half a million veterans, and even though the north-west only holds about 12% of the national population, we provide approximately 25% of the army infantry.

So we knew that frontline soldiers coming back were going to have seen deployment and military action, and would need a service.

The project that we’re running is a north-west wide military veteran’s psychological therapy service funded by the NHS, offered in response to the Morrison "Fighting Fit" report from November 2011 about the mental health needs of military veterans.

There are a number of similar services around the country, but we understand that we’re the largest and offer the broadest range of interventions.

We have a very geographically dispersed veteran population, who we assume are technically savvy, and we wanted a solution that would enable us to engage with them.

Our staff are also peripatetic and go out and about all over the north-west, making them hard to get hold of in a traditional manner. We wanted a solution that would get us clinical feedback on veterans’ psychological wellbeing without necessarily travelling to see them all the time.

We looked at what was on offer around the country with regards to smartphone technology and mental health, and we came across the Buddy app which had won an award for NHS innovations.

The company behind it, London-based Sidekick Studios, initially did some work with South London and Maudsley NHS Foundation Trust in developing a mental health app for clients with psychosis.

We liked what we saw, so we approached the north-west Innovations Fund and put in a successful bid to pilot the application for military veterans.

BB: How does Buddy work?

AB: It’s a mechanism by which the service user gets a text message asking them to rate their day on a numeric scale, then enter some free text about what they’ve been up to.

"We knew that frontline soldiers coming back were going to have seen deployment and military action, and would need a service."

The clinician and the service user both have access to view that information through a web-based interface, so the veteran can view their previous two weeks and, with the clinician, spot patterns as to where their bad days were. This acts as a diary for a cognitive behavioural therapy technique we use, called behavioural activation.

We know some of our guys struggle with the transition from military life to civilian life, and Buddy allows the service user to create other text prompts that encourage them to take part in activities. Some natural antidepressants are doing things you enjoy, that give you pleasure or that are fun, or give you a sense of achievement, that involve physical activity, and ideally with other people so there’s a social connection.

They might say they’re getting really fed up sitting in the house all the time, so with the clinician they might agree to go for a walk or down the gym, and set up a text reminder for 10am in the morning that says, "hi, why don’t you go to the gym or go for that walk today like you said last week?"

BB: How do you use Buddy alongside traditional treatment?

AB: Traditionally, we’d ask clients to complete pen and paper diaries between sessions. The difficulty we found was people would retrospectively complete a diary, and lose some valuable information because they’d be filling it in the day before their therapy session, trying to remember what they’d been doing four or five days ago.

Also people’s perception of their week is dependent on their mood at the time of completing their diary. Having this daily live feed gave us some much better evidence and information to work with.

Buddy also allows either the veteran or the clinician to set appointment reminders, so the client will get a reminder text message 24 hours before their appointment and another two hours beforehand. We think it’s helped reduce the number of missed appointments.

BB: How have you expanded the use of Buddy?

AB: We have some veterans whose alcohol intake we wanted to reduce between therapy sessions, so we used it as an alcohol diary. Some severely traumatised clients suffer dissociation and find it hard for them to recall what they’ve been doing during the week; they have these absences.

So we’ve used Buddy as a way to plug the gaps and work out what happens between sessions. And we’ve used it in pain management, helping find the optimum time between taking medication for an appointment, because strong, opioid-based pain medicine impacts on your ability to process cognitively.

BB: What feedback have you had from veterans who use Buddy?

"Buddy helps support our aim of normalising mental health issues and making them less of a stigma."

AB: It doesn’t suit everybody; people opt in to using it. Clients like that tapping on a phone is quite discreet, compared with taking out a pen and paper or leaving a diary around where your family might see a record of your mood or the number of nightmares you’re having.

Some military personnel are familiar with the Big White Wall [an online support network for emotional issues] where they can have anonymity, and we thought Buddy would be one step further towards having a face-to-face therapeutic relationship.

We know that what’s functional for enlisted personnel, such as maybe not expressing emotions, is normal in a war zone, but not helpful when they come out. That might take the form of repressed emotion or a need for anger management.

As a tool to use alongside therapy, Buddy helps support our aim of normalising mental health issues and making them less of a stigma.

Despite a recorded rise in IED incidents, deaths of coalition forces continue to fall.

The Military Simulation and Virtual Training Market in France to 2025: Market Brief