Electrothermal Water and Ration Heaters for the Defence Industry

Electrothermal is a UK-based company that manufactures and designs water and ration heaters for mounting inside military vehicles. Our heaters are designed for operations on the move and can fit into the cramped quarters of a tank, or other military vehicles, to provide necessary sustenance to the soldiers on-board.

Electrothermal was originally awarded a contract to design and manufacture 10,000 RAK15/30 units for supply to the US Army. We now have more than 20,000 combat-tested units in the field all over the world, which have been installed into support and frontline vehicles such as the Abrams M1A1, Bradley’s LAV, M109 Paladin and many more.

In addition, all the British Army MAN trucks in the support vehicle fleet are equipped with our RAK15/30 units. They have proved especially beneficial in the recent war in Afghanistan, as having the RAK units installed in the cab ensures that vehicles stay on the move and are consequently less vulnerable to attacks from insurgent groups.

Water and ration heaters for land, air and sea operations

Electrothermal recognises the importance of maintaining both the fluid and nutritional intakes of military personnel at optimum levels. Our range of RAK water and ration heaters is designed to meet the demands of modern, mechanised forces worldwide.

Our RAK water and ration heaters provide potable hot water and heat meals ready to eat (MREs) on demand to give a hot meal and drink for personnel whether under combat conditions, on patrol or back at base. They are rugged, manufactured to withstand the most harsh environments and can be installed in armoured vehicles, patrol boats and helicopters.

Our current range of RAK water and ration heaters includes:

Electrothermal will soon be able to offer a ‘chiller crockpot’ with all the benefits of the RAK15/30 coupled with the additional benefit of cooling.

The RAK15/30 is at the optimal size to fit into the cramped quarters of a tank, or other military vehicles, and can provide hot meals and drinks for its five person crew, heating two pints of water and five MREs simultaneously. When used for water only, the RAK15/30 can heat up to 1gal of potable water for drinks, washing or medical purposes. Depending on the power rating, the RAK unit can heat 1gal of water in just 20 minutes under normal ambient conditions.

The heater does work in extreme climates too but it may take longer to heat the contents if the prevailing temperature is bitterly cold. When switched off, with the cover closed and locked, the thermally insulated unit keeps its contents piping hot for between four and six hours.

RAK15/30 units are designed to withstand the rigours of modern conflict and have been comprehensively tested to meet military standard specification MIL-PRF-44466D, MIL-STD-461 and MIL-STD-810. They are also certified for food heating after meeting NSN ANSI 4-2007.

The outside of the RAK15/30 unit remains cool-to-touch to ensure safe transit should the product be mounted on the back door of a vehicle, or be located in an exposed position. The cool-to-touch feature also gives the unit a very low thermal signature, which is critically important for maintaining discretion during military operations.

Constructed from a robust stainless-steel outer casing, the unit is sealed to be water-tight, so that any steam is retained within its interior. It has both low and high temperature settings and its own built-in control, so that a separate control unit is no longer necessary. The choice of heating ranges is either 66ºC – 71ºC (on LO setting), or 82ºC – 88ºC (on HI setting).

Bibby Scientific announced that leading manufacturer of robust field and laboratory technologies Electrothermal® now has more than 20,000 combat-tested RAK 15/30 units in military use worldwide, which have been installed into support and frontline vehicles, including the Abrams M1A1, Bradley LAV and M109 Paladin.

Electrothermal were originally awarded a contract to design and manufacture 10,000 RAK units for supply to the US Army. 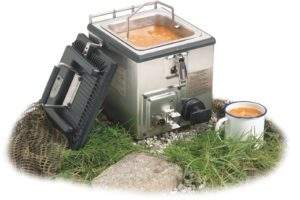 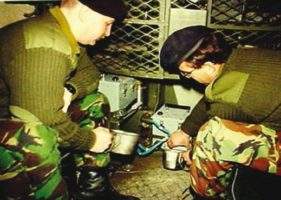 Electrothermal were originally awarded a contract to design and manufacture 10,000 RAK units for supply to the US Army.

Bibby Scientific announced that leading manufacturer of robust field and laboratory technologies Electrothermal® now has more than 20,000 combat-tested RAK 15/30 units in military use worldwide, which have been installed into support and frontline vehicles, including the Abrams M1A1, Bradley LAV and M109 Paladin.

When facing the unique requirements of the scientific, industrial and healthcare sectors, sometimes something more than an off-the-shelf solution is required.

Electrothermal Electromantles Give you Peace of Mind on Safety

Lab Innovations 2012 is running at the NEC, Birmingham on the 7th and 8th November.

Bibby Scientific will be participating in the Fisher Activate Science roadshow that is already underway, visiting venues across the UK.

Electrothermal on the Bibby Scientific Stand at ACHEMA 2012

Electrothermal will be on the Bibby Scientific stand at ACHEMA 2012 to showcase our latest products, along with those from our Bibby family brands of Stuart, Jenway and Techne.

Save Up to 90% on Equipment Running Costs: Join the Lab Revolution

Everyone considers the initial purchase cost of laboratory equipment, but what about their running costs?

Bibby Scientific's new web-based platform brings together special offers on products from all four of the company's internationally recognised brands.